The week started off so mild.  People took to the local rail trail to exercise in the amazing 50 degree weather on Sunday where I live near Vestal, New York. 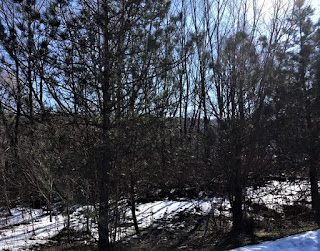 The sun shone, the sky was blue, and the snow was melting. 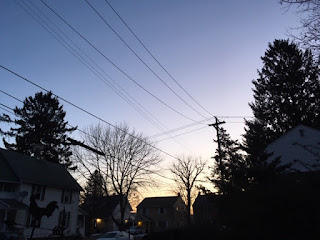 Monday, a beautiful clear sky.  But that was the last of the sun.  By Thursday, the snow had arrived again. 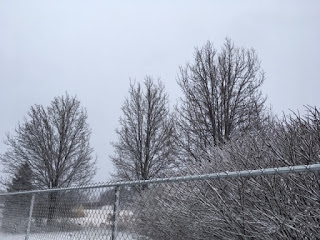 Not visible in the picture, the buds on these Bradford Pear trees were covered in snow and were not going to hear the signal to start their bloom cycle today.  The sky was white, the sky we know as a "snow sky". 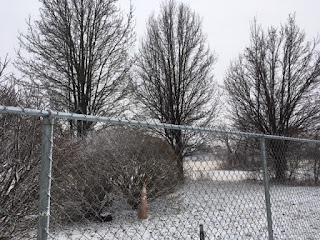 Neither were these Bradfords, as the wind blew. 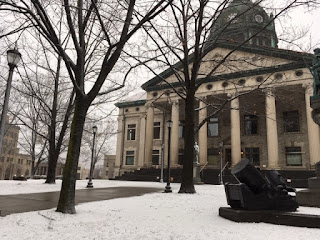 Courthouse, downtown Binghamton.  No end to the gloom here.  In this picture, what started as a slushy mix made for some slippery walking. 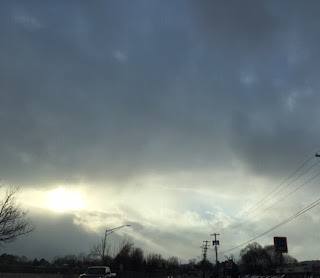 Around sunset, the sunset tried to give us a show.

We missed the blizzards to the north and to the west, thankfully.  Spring has backed off and winter has reminded us to look at the calendar.

Join Yogi and other skywatchers each Friday for #SkywatchFriday.
Posted by bookworm at 7:53 AM 5 comments: Links to this post

As I write this, we haven't had snow on the ground in a few days, but that is about to change later today.  Just to the west of us, parts of New York State are under a blizzard warning - intense snow and wind, through Friday night.  The Great Lakes aren't frozen due to our relatively mild winter and that's a perfect setup for lots of snow near the lakes.

We won't get the massive snow where I live but we are going to get strong winds, too.  No surprise - March is almost here.

We had some snow earlier in February and I decided to head to the public library.

On the side of the library parking lot in Endicott, New York, I saw two trees. 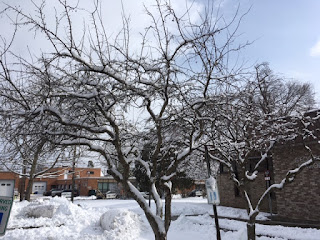 One person's everyday view is another person's visual treasure.

Joining Parul at Happiness and Food with her #ThursdayTreeLove.
Posted by bookworm at 6:22 AM 5 comments: Links to this post

This is the building Swamp Root built. 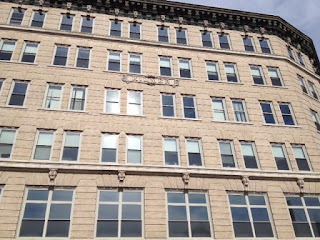 The Kilmer Building on the edge of downtown Binghamton, New York was built in 1903 as a facility for manufacturing Kilmer's Swamp Root, a patent medicine that made its creator quite wealthy.

It later had other tenants, including a perfume making facility. Eventually, it stood vacant for some 17 years.  In the early 2000's, it was renovated and opened with two tenants, a jewelry store (which closed earlier this year) and an upscale restaurant. 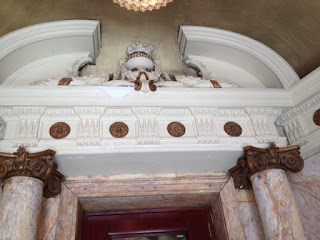 Inside the Kilmer building. 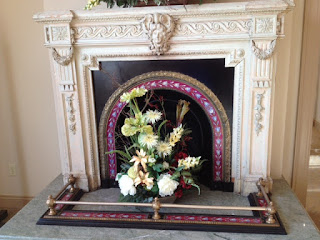 A fireplace inside the then-jewelry store. 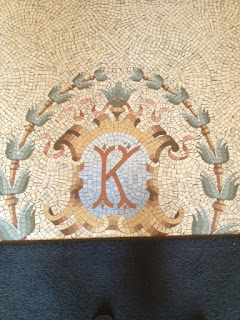 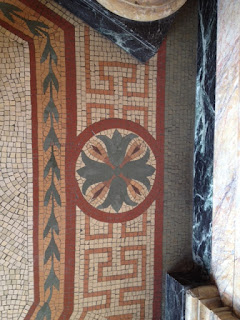 Some more of the mosaic work in the building.

Our area has a wealth of old buildings.  Sadly, many are in ruin

But others, like the Kilmer Building, have been rescued.

I am joining the following blog hops this Wednesday:
Sandee at Comedy Plus

Posted by bookworm at 6:25 AM 10 comments: Links to this post

She Did the Best She Could

All the astronauts were men.  The people in the control room were men.

Little did I know about the female "computers", who, starting as early as 1939, helped to put airplanes in the air and, eventually, the United States into space.  No one talked about them.  No one taught us about them in school, even in the science oriented high school I attended in New York City in the late 1960's.

No, NASA's face was totally male.

I did not pursue a science career (I was never able to conquer mathematics) but the space program always remained dear to me.

Some of these computers, not machines, but humans who did their calculations by hand, were women of color.  They rode to work in segregated buses, consigned to the back.  They worked in segregated rooms.  Some had to go to the bathroom in a different building than they worked in.

In those days, a "computer" was a human.  Machine computers were primitive, and not trusted for many calculations.

Eventually, a book called "Hidden Figures" told some of the stories of three female computers of color..  Among them was a woman by the name of Katherine Johnson, who did the calculations for some of the first Mercury missions and Apollo 11, the first manned mission to land on the moon, among many other accomplishments.  She retired in 1986.

In an interview several years ago, she humbly said "I did the best I could".

Fast forward to 2017, when spouse and I traveled to Columbia, South Carolina to view the total eclipse of the sun.

At the museum where we saw the eclipse, there was a NASA trailer and a long line to get in.  We saw their display and, at the end, were invited to the Langley, Virginia NASA facility where Katherine Johnson and others had worked, for an open house that October.  They only hold the open houses every five years, and this one was special - their 100th anniversary.   Health permitting (Ms. Johnson was in a wheelchair by then), Katherine Johnson was planning to attend.

But my elderly mother in law's health was starting to fail, and we could not make the trip.

Yesterday, we lost Katherine Johnson, aged 101.
May she rest in peace.
Posted by bookworm at 6:25 AM 8 comments: Links to this post

Jump In - Music Moves Me

It's Monday, and it's time to rock into a 29 day February!  It comes only once every four years, so it's time for a celebration.


Who are the members of #MusicMovesMe?

We are bloggers who blog with music each Monday. If you have music to share with us, you are most welcome to join! (Music Posts Only- Please post containing links to You Tube or Vimeo for actual music.  Other posts are subject to removal or labeling as "No Music".)  Every other week we have a theme and on alternate weeks we have "You Pick".

Our conductors? First, there is XmasDolly.  Her chief co-conductor is Cathy of Curious as a Cathy. Her other co-conductors are Stacy of Stacy Uncorked, and me.

For February our guest conductor is Robin at Songbird's Crazy World.  For today, her theme is: "You Pick".

I can't resist one song about leap years:  Leap Year Song by Jonathan Mann.  After all, Saturday will be Leap Day.

But I did look for some songs that talk about leaping, or jumping, for a leap day theme.  These aren't Leap Day songs, but enjoy, anyway!
Jump, by Van Halen.

Jump Into the Fire, sung by Harry Nilsson.

Jumpin' Jack Flash - The Rolling Stones, in a live performance.

And one more, from their first album.  You either like this or you don't.  The Red Hot Chili Peppers and Get Up and Jump.

Speaking of jumping, I couldn't resist including a little Double Dutch.  I grew up in New York City watching this style of jumprope, and this video give you a taste of its competitive level.  I could barely single rope jump, with my lack of coordination.  This jumping is so athletic.

And that's a wrap!

Please join me same time, same place, next Monday!
Posted by bookworm at 12:07 AM 7 comments: Links to this post

No Golden Snowball This Year

In the midst of turmoil in our government and a possible pandemic of something originally known as the "coronavirus", spring made a temporary visit to the Southern Tier of New York State today.

It seemed everyone was out and about, soaking up the 50 degree F (10C) temperatures.  The walking trails were crowded.
True, it will be a while before the snowpiles are gone.
But the trees were responding to signals we humans do not pick up.  I am sitting in my yard, in fact, as I blog this, and I am looking at a tree glowing in the sun.  Its sap is rising.

Soon enough, it will be cold again. We also can have some of our worst snowstorms in March.  Right now, though, we are some 25 inches (63.5 cm) below normal in our snowfall.

We sit in the middle of the Golden Snowball statistics (the Golden Snowball is an informal competition between five cities in upstate New York for most snowfall in the season.)  Rochester is in the lead, and even they are below normal.

But I was thinking of all those walkers out today, even if the breeze took some of the heat out of the air.

Back when I was growing up, today would have been celebrated with a day off from school - George Washington's birthday.

And everything that can be said about him has been said, right?

To get us into the mood:  11 Little Known Facts About George Washington.

I'm not sure I will finish it, as I don't seem to have the stamina to read a lot of non-fiction right now.  Perhaps, once I retire, that will change.

But there is a lot of fascinating information here, as a good modern biography must explore: his actions towards the enslaved people he owned, the truth about him freeing them when he died (particularly heartbreaking), and his beliefs concerning the abolition of the institution of slavery.  None of this was ever discussed in my history classes back in the 1960's.

There's more, including a fascinating discussion of his false teeth, the lies he told, and the things people believe about him that just aren't true.

The various charts in the book (diseases he suffered from and how he was treated for them, the animals he owned, including his beloved dogs, the battles he fought in) are worth the reading all by themselves.

All in all: a complicated man, this man who was "the father of our country".

Posted by bookworm at 6:31 PM 5 comments: Links to this post