Binghamton In the Time of the Pandemic

Submitted for your approval.

Binghamton, New York, a city of about 47,000. people, the boyhood home of Rod Serling of Twilight Zone fame.

A senior citizen, AM, was at her desk in downtown Binghamton, on March 19 when she received a phone call.  "We are coming to pack you up right now, so you can work from home."  She knew the pandemic had come, and she quickly packed up her desk and called her spouse while someone came to unhook her computer.  "Take pictures of what I'm doing" the tech person said, "so you can hook everything back up when you get home."  Her spouse called and said he was waiting.  She said quick goodbyes to her officemates.  There was no time to think.

Her equipment went in two boxes and a tech brought it to the front door.  AM packed the third box and went outside to open the trunk of their vehicle.  The cargo area was filled with bags of cow manure meant for their garden but forgotten in the rapidly approaching pandemic.

The cargo area was rearranged and office equipment loaded, and they sped off to their home. 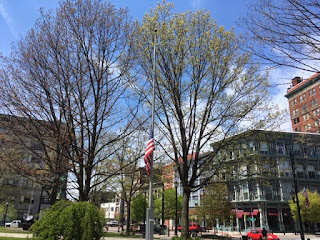 AM and her spouse wouldn't see the downtown again until May 14.  Spring had come.  The flag was at half staff to honor those who had perished due to COVID-19.   It's hard to see, but the parking spots were mostly empty.  A few pedestrians, some masked, some not, walked. 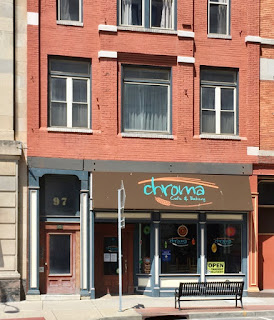 The restaurants - some closed, some devoted to helping to feed hungry schoolchildren.  Those that served the public could only do take out and delivery.  A florist and credit union next to this bakery were both closed.  The world had continued on while AM had mostly stayed at home.

One non profit had three "we are closed" signs on its windows. A nearby art gallery had a simple sign: "Next First Friday October." 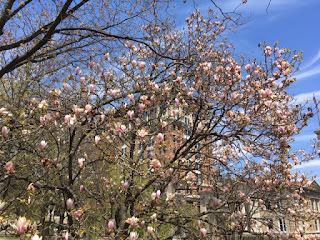 Masked, AM walked to the courtyard where she ate lunch on nice days.  She was hoping a magnolia that always bloomed late would be still blooming.  It was way past peak, but still had blooms. 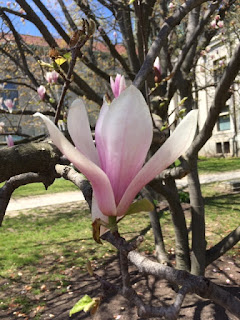 It had waited for her. 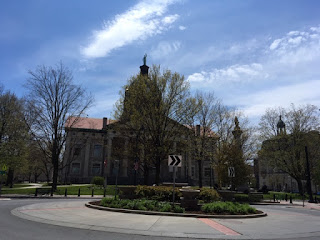 The roundabout downtown was deserted.  She stood on the road and took a picture.  Courthouse center, old City Hall (vacant) on the right.


AM knew she wouldn't be permitted into the building where she worked for nearly 22 years.  About 15% of the office was still in there and they had to be protected.  She walked to the front door and peered into the front lobby.  It was empty. 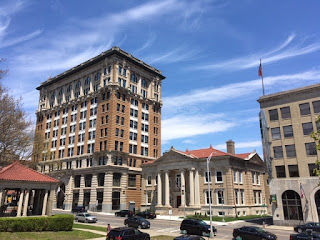 One of her favorite downtown buildings, built in 1904.  How empty was it? 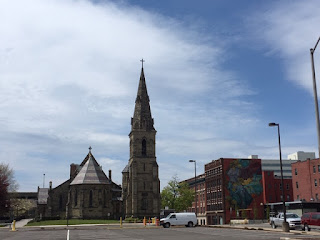 The church on the left, Christ Episcopal, dates from 1854. AM has visited it a number of times to admire its stained glass windows. Its architect, Richard Upjohn, was also involved in the design of the present Trinity Church in downtown Manhattan.   The parking lot below it is normally full. 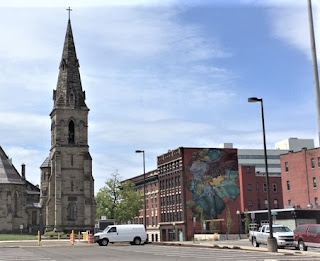 If you look to the right of the church, there is a beautiful mural to the right.  One of those buildings houses a wonderful restaurant.  It only started to reopen (for take out) this past week.

You have just viewed some of downtown Binghamton, New York, a city like many in our United States.  It has faced the fear of COVID-19 head on.  Now, its citizens look forward to the day when they can walk the streets without masks, a day when the restaurants and bars will be open and this spring day of deserted buildings and almost empty streets will be a distant memory.  Until then, the time will pass for us, in the age of COVID-19, within the Twilight Zone.
Posted by bookworm at 10:11 AM

Email ThisBlogThis!Share to TwitterShare to FacebookShare to Pinterest
Labels: Binghamton