Even though I wasn't able to take pictures of the Dinosaurs as I had planned to do on July 2 First Friday, I got some other good pictures.  There has been renovation going on downtown the past several years.  And a week ago, local mosaic artist Susan Jablon, whose mosaic dinosaur was vandalized, nevertheless took a Saturday last week to gather community young people together for a mosaic project.  This is on our Riverwalk.  Here is a picture "as a whole", with a renovated building behind (more on that building a little later). 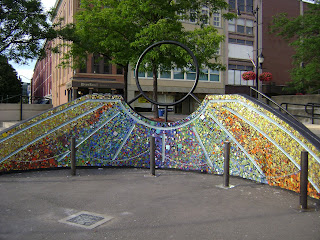 Here is a closeup shot.  Since this doesn't face the public sidewalk, maybe it will be "more safe" from vandals.  Let's hope.  It isn't too far from a Binghamton University building downtown, so that might help also. 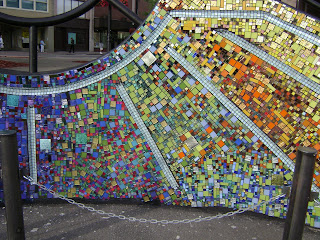 Susan has some coverage of the building of this mosaic wall on her blog.

I used to make "mosaics" using kits when I was growing up years ago.  This is real "grown up" mosaics.  One day, I hope to have the time to perhaps learn this art form.  I don't know if I have the patience, but I bet it is a lot of fun.  And, it will keep my mind (and small muscle dexterity) active!

As far as the Riverwalk itself here is one shot.  Many of the "speckles" in this photograph are ducks; others are rocks. 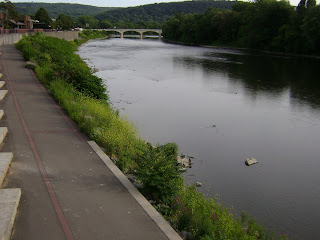 Here is another view, showing hanging baskets donated by Security Mutual Life Insurance Company of New York, a company headquartered downtown that has done a lot to improve downtown. 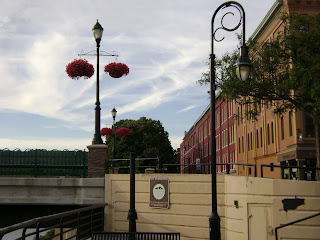 Here is a closeup of a metal "marker" on the Riverwalk.  There are several of these, highlighting history of our area - The Bundy Manufacturing Company, for example (which eventually became IBM-yes, IBM originated in Binghamton).  The one I chose to take a picture of was the famous race horse Exterminator, winner of the 1918 Kentucky Derby and many other honors, owned by a local patent medicine manufacturer, Dr. Kilmer. 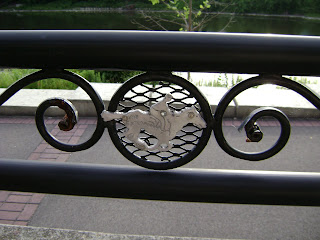 Finally, here is another view of the renovated buildings shown behind the mosaics.  Unfortunately a bus came by just at the wrong time, so part of the view is blocked.  I haven't looked up the history of this particular block of buildings, but I promise I will. 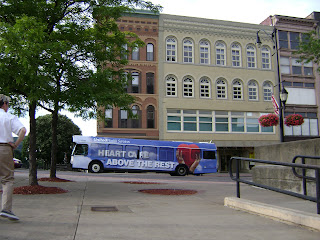 I will post some more photos later in the week, if I have time.
Posted by bookworm at 12:27 PM