There are going to be two types of reactions from people reading this title:
a. "Who?"
b. "Wow! He's still alive?"

Bob Feller is a pitcher: he's the second oldest Baseball Hall of Famer and trust me, at age 90, not only was he able to trot out onto the field (and I do mean trot), pitch (AND reach the plate-sort of) but he got a standing ovation and by far the loudest cheers of the game.

I have some pictures of him, but from so far away (we were sitting about as far out as you could get) that it may not be worth trying to put them on the blog.

I was honored to see this game in Cooperstown, NY, at Doubleday Field, on Sunday, along with about 7,000 other people (not quite a sell out, but this is a small, historic, ballpark)

The link above does have a good photo of Bob Feller at the game.

I'd like to talk a little bit more about the game and the parade.

The pre-game parade was small town America at its best - the local merchants, the trolley cars full of local scholars, the Mayor of Cooperstown, some politician running for election, a young man standing on top of two horses (one per leg). There was an older man, maybe in his early 50's, who looked so much like Mickey Mantle, who wore the Yankee #7 (I saw him signing autographs later...who was he?? I can't seem to find out from Internet research.)

Last in the parade came two trolleys, with the old-timers in them. In the first picture, the left most person is Bob Feller, but you can only see that if you enlarge the photo way beyond what I can post here. Guess it would help me to have some photo editing software. 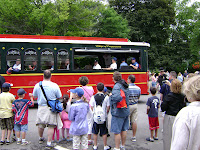 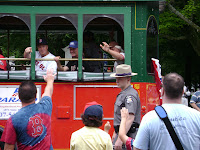 I do have some other photos, including a good one of Brooks Robinson, which I may upload in another post.

I haven't followed baseball in many years. I got fed up back in the 1970's with the greed, and then later the performance-enhancing drug use. I enjoy minor league baseball but I haven't seen a major league game since 1973. This game was a step back to another time (although many of the players didn't retire or didn't play until after I lost interest). The most notable thing was-they wanted to be there. It was so obvious. They clowned with each other. Steve Lyons took a boy out of the stands and let him field alongside of him. That boy had a good arm too, he fielded a ball and started a double play! Some of the players signed autographs as mobs of children followed them along the fences. FOR FREE. (I didn't try to get autographs-I let the children get theirs.)

Would I go again next year? Maybe. But I would sure buy my tickets a lot more in advance. (and maybe even join the Hall of Fame, so I could get the best ones.)
Posted by bookworm at 6:01 AM

Email ThisBlogThis!Share to TwitterShare to FacebookShare to Pinterest
Labels: baseball