Hello, fellow music lovers, and welcome to another episode of Music Moves Me!

Who are the #MusicMovesMe bloggers? We are bloggers who blog about music each Monday and if you have music to share with us, you are most welcome to join!  First, there is XmasDolly,   Her co-conductors are:  Cathy from Curious as a Cathy, Stacy of Stacy Uncorked   and, finally, me.

We'd love you to join us every Monday and share your music with us.  But please note this is is a music blog only - please post at least one You Tube or Vimeo video so we can dance with you.

Songbird's theme for today is: "You Pick".  It's my last non-holiday music post for 2020, and I want to make it an interesting one.  We live in interesting times, after all. So, I want to feature some songs whose music, lyrics or videos are just a little unusual.

This first one may be unusual because of who was in this band.  Billy Joel did not start out as a piano man, it turns out.  He was in a couple of bands prior to starting his successful solo career, and even released a heavy metal album. Welcome to the two man band called Attila, which broke up when Joel ran off with the other member's wife. (Apparently you can't make this stuff up.)

Attila's one album has been called by some "the worst rock and roll album ever".  You can now judge.  Here, from 1970, is Jon Small (drums) and "William Joel" (just about everything else) in "Wonder Woman". No, I won't be insulted if you listen to just a sample.

Simon and Garfunkel released this song as part of their Parsley, Sage, Rosemary, and Thyme album.    Here is "A Simple Desultory Philippic (or How I Was Robert McNamara'd into Submission)."  This is one album I wore out in my teen years.

I was on Twitter Friday, and ran across the most incredible music video.  After I read the backstory, I knew I had to share it with you.

In 1972, prolific Italian singer Adriano Celentano wrote a song with nonsense lyrics that (to his Italian ears) sounded like American English.  He was frustrated by a years long trend in Italian music to incorporate English into the lyrics.  Prisencolinensinainciusol is the song, and it made it up to #1 in Italy and several other countries.  It's still played, and recently went viral, almost 50 years after it was recorded.

There is also a video on You Tube with the "lyrics", which are totally nonsense, if you read them. If you hear it, though....what do you think?  I'd love, especially, hearing from non native English speakers in the audience and if this sounds like English to you.  Honestly, it gives me (a native English speaker) a bit of a headache, and that video is pretty, um....different.

Next is a song you will either love or hate.  I love it, and I even owned the (8 track - remember them?) album at one time.  This is a live performance of Hocus Pocus by the Dutch group Focus.

Here's one from"Weird Al" Yankovic, my favorite parody singer. First, from 2014, Weird Al and "Foil". Focus on the video.  It starts out straight, and then goes sideways in the most hilarious way.

Email ThisBlogThis!Share to TwitterShare to FacebookShare to Pinterest
Labels: music, Music Moves Me

A big "Thank you" to all those who helped me to identify a mystery plant I had planted last fall and lost the tag for.  I believe I have a positive ID. 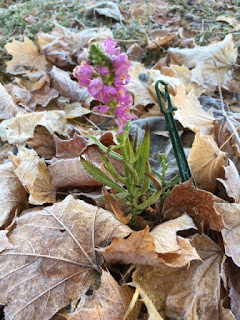 It's blooming a little out of season, but I now believe this is an obedient plant,  Physostegia virginiana.  It's interesting that a couple of my readers tried to identify this through an application and one of the results was "snapdragon". The flowers are snapdragon like, but this does have a square stem like a mint, and, in fact, it is related to mint.  And yes, it will spread.  It's nowhere near five feet tall, which it should be, but, then again, I think it was stunted by its location.

Thank you to my guest photographer's sister, whose expertise came through once again.

The good news is, deer don't like it but bees and hummingbirds do.

Incidentally, you don't have to obey the plant.  It's called "obedient plant" because you can push flowers to new positions and the flower will stay where it was pushed.

Fun for next year?

Email ThisBlogThis!Share to TwitterShare to FacebookShare to Pinterest
Labels: flowers

Small Business Saturday in the Time of Coronavirus

And times are hard, here in the Southern Tier of New York State, and elsewhere.

I looked at some of my previous posts, listing where I went to shop, and the voice in my head recited:

Yes, this jewelry store I mentioned in 2012 is a woman-owned business now but I stopped wearing jewelry about two weeks into being sent home to work.

I didn't worry about Made in USA vs. Made Abroad but Sold by a Local Business, like I had some years.

I did almost none of the traditional Black Friday or Small Business Saturday things.  I didn't get up at 5am.  I slept in.  I went walking.  I read.  I watched TV.  I got ready to put holiday decorations up.

I did feel a little guilty about shopping online at a couple of chain stores that have a brick and mortar presence here, but they offer curbside pickup and, I reason, they employ locals.  I'm sure going to like those slippers I treated myself to.

Via TV, I got my first look at our local indoor mall since March, which was also the last time I was in there.  Several small businesses are located in that mall.  I know someone who works in one of them.  Hate to say it, but too depressing.

Santa is coming to the mall December 4 but it's going to be different (what isn't?) This year, for  social distancing reasons, Santa will sit behind "snow globe" decorations that "will allow children to interact with Santa through plexiglass." And, oh yes, you have to make an appointment.

I ended up going to the grand total of one small business today - a (what else?) nursery.  I bought a ZZ plant (something I've wanted to own for some time but never got around to it), a self watering pot (for the Vietnamese Coriander we took cuttings from - they have rooted nicely), some potting soil, and two small but fancy poinsettias.

Plants are my source of happiness.