The Catholic Dick and Jane 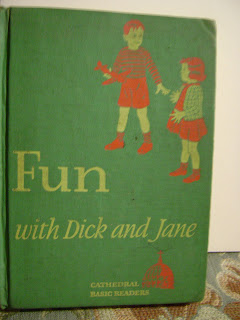 Unless you are a baby boomer, you are probably gagging just about now.

But to people my age...well, most of us learned to read using the Dick and Jane readers. Maybe it was the beginning of the end of literacy - and I did find the books stupid and boring - but maybe those illustrations sparked my interest in non-urban life.

When I opened the book at Collectors Corner at the Friends of the Library book sale in Ithaca, NY on Saturday, I was greeted by a sticker picturing a priest taking the confession of a young schoolboy.  Then I noticed the "Cathedral Basic Readers" imprint.  Opening the book, I discovered that some of the stories were religious.

I had myself a find.

So, after some agonizing, I bought it.

In many of the Catholic editions of the Dick and Jane readers, Dick and Jane had their names changed to names considered more "Catholic". But in the edition I have, they were Dick and Jane.  And sister Sally.  And dog Spot.  Complete with "vintage water color illustrations".

I was amazed to find that Dick and Jane were technically adults by the time I read their books for the first time in the 1950's.  They made their first book appearance in 1930.

The 1941 Cathedral edition was the first Catholic edition.

I've sometimes wondered if I should get into collecting books. Right now I simply like to hold pieces of history.  But one day, I may take this love to the next level.  If I do, I have books like this to thank.

Do you remember learning how to read with Dick and Jane?
Posted by bookworm at 5:30 AM