Recovery lifts the spirit.  Slowly but surely, recovery in my neighborhood hit by Tropical Storm Lee September 8 progresses.  I feel so much for those in California and elsewhere being struck by weather disaster this week; my heart goes out to them because I know how much work is ahead of them.

To them I say:  it will be hard, but many people are pulling for you - and trust me, many people here know so much better than I do.

When your neighborhood is no longer filled with closed businesses, it makes the holiday season brighter.

Last Wednesday, the Home Depot in my neighborhood of Westover near Johnson City, NY reopened.

Wednesday, the Greek House restaurant in my neighborhood reopened.  For three months a sign reading "Sam Will Be Back!" was in the front window.  Sam is back, and the parking lot is crowded.

Yesterday, the Number 5 restaurant in nearby Binghamton, in a historic building, reopened.  The Advance Auto Parks near the Vestal Rail Trail, where I exercise walk, has also reopened.

This, of course, isn't to say all is rosy.  For example, close to the Wegmans supermarket in Johnson City (about a mile from the Greek House), there was a lot of flooding.  One of the casualties was a storage facility.  (This picture was taken a month or so after the flood, which is a sign of just how bad the damage was.) 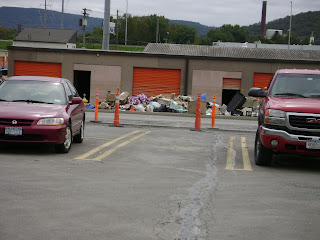 Today I found out some of the units (not necessarily the ones I took a picture of from the Wegmans parking lot) were rented by Binghamton's Toys for Tots, and some $20,000. worth of toys were destroyed in addition to $10,000. in other supplies.

Tomorrow, there will be a benefit concert for our local Toys For Tots.   The bar the concert is being held in is located in one of the worst hit areas of Binghamton.

And finally, there is a tiny mystery at the former BAE plant across the street from the Greek House restaurant in my Westover neighborhood.  In November, BAE announced they would not be returning to the flood stricken facility that employed some 1300 people..  But in the past several days, people are obviously working there again.   One end of the building has some activity, there are cars parked in one of the parking lots, and yesterday I saw (on my way to work) a Pepsi truck parked in front of the building, with a man unloading cases of something.

In my November post, I called the BAE "recovery" the Long Goodbye that started September 8.  Looks like, although there is no permanent recovery, that particular goodbye is not yet final.