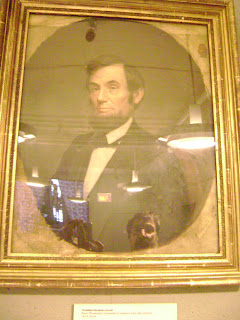 (Matthew Brady photograph of Abraham Lincoln in the basement of the Tioga County Historical Society, Owego, NY November, 2011, salvaged from the September 2011 flood..  Photographed, not too skillfully, by me.)

This past week, some exciting news was announced - the report of the first doctor to reach Abraham Lincoln after he was shot was found.  The doctor was Dr. Charles Leale,a doctor who had seen Lincoln speak several days before.  For some reason, Lincoln's face fascinated him and he decided to go to Ford Theatre that fateful night of April 14, 1865, to study Lincoln further.  Accounts say he was only about 40 feet away from Mr. Lincoln when he witnessed the assassination.

Of course, it is always exciting for historians to have a source document found.  But, to me, what is more exciting is the availability online of the document itself.

For example, doctors have wondered if Lincoln's life could have been saved by modern medicine. As of 2007, the answer would have been "yes but with a lot of brain damage".  Now, we have an exact account of the medical measures taken.

From my point of view, though, what fascinated me the most was the document itself.  If you look at it, you will see it is beautifully written.  Not only is the writing that of an educated man, but the quality of penmanship is breathtaking to the modern reader.  For example, I would never win an award for my penmanship.

I had to do some research.

Handwriting was a main form of communication during the Civil War.  Those fortunate enough to be schooled spent countless hours practicing penmanship.  There were no typewriters commercially available (to the best of my knowledge) until right after the Civil War, although they had been invented.  Many documents were handwritten.   Part of judging how educated a person was consisted of judging penmanship.

Each side, Federal and Confederate, wrote countless letters, battle orders, and the like. Some kept diaries. Most all of these were handwritten.

What I found is that there were two main styles of writing during the Civil War era, "Copperplate script" and "Spencerian script."  I am not a graphic designer, but it seems from the small amount of research I did that both scripts, in one form or another, are still quite alive and well.

Even the instructions provided for Spencerian script sing to me.

With penmanship an instinctive skill, the writer was free to express his thoughts - and I could imagine the thoughts of Dr. Charles Leale flowing as he wrote about the fateful night of April 14 and morning of April 15, 1865. He did not talk about that night, the night he spent holding the dying President's hand, for years.  He  made his observations public in 1909, the 100th anniversary of Lincoln's birth, in a speech called "Lincoln's Last Hours".

Dr. Charles Leale died in 1932, one of the last living witnesses to the assassination.

Have you learned calligraphy?  Do you mourn the removal of cursive handwriting from elementary school curriculums?