Don't Give Up Christmas - A Call to Action

The other day, I listened to CNN - something I don't do much of anymore but I just happened to tune in - and they were talking about people in the United States who were so depressed about the Newtown shooting that they had decided not to celebrate Christmas.

Outside of Newtown itself, whose residents should make the decisions that best work for them, I think that is a mistake.  Throughout history, people in deadly situations have decided to keep trying to live the best they can as they survive wars and natural disasters.  We can not imagine what it was like, for example, to live in London during the Blitz. Or, what it was like to celebrate Hanukah in Nazi Germany.


This is not exactly on the same scale, but I wanted to share something here in Binghamton, NY, the site of the #8 most deadly shooting in U.S. history in April of 2009.  (How I wince as  type that - this is not a sport to keep statistics on).  These are not empty words - Mary Sherlach, the school psychologist killed at Sandy Hook Elementary, went to high school in nearby Vestal, New York.  We mourn her death even as we relive memories of that day in April, a mass shooting in an adult education classroom for immigrants.

Every final workday before the Christmas holiday break, a downtown Binghamton, New York tradition takes place in a building lobby. 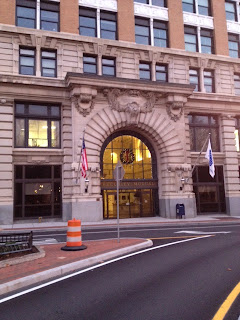 I approached the building on Friday, its lobby brightly lit.  This building was built in 1904, is 10 stories tall, and is the third tallest building in Binghamton.


Normally, the building isn't open to the public but on this day, the public is welcome to come into the warm lobby.  What awaited us? 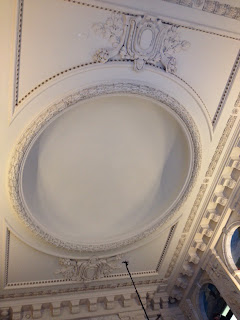 A decorative ceiling, so common back then, so lacking in modern buildings. 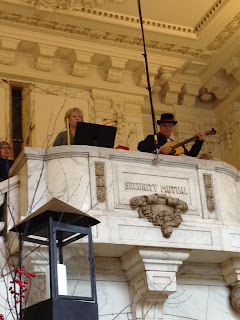 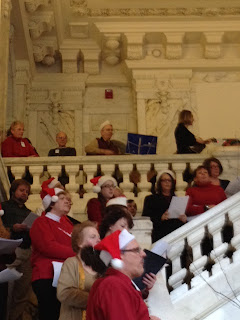 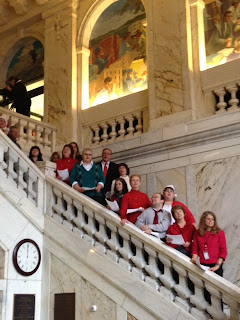 ...and more carolers.  These are employees of a local life insurance company, Security Mutual, who gather every year for a half hour of caroling in the marble lined lobby. (The paintings visible in the above picture date from the 1980's, I am told.) 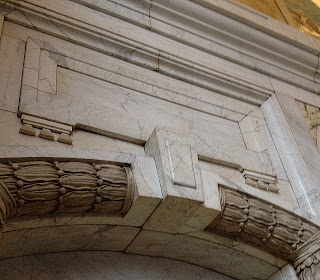 And finally, one more detail from the lobby.

The only thing missing is the music. I wish you could have heard it. You would have laughed, cried, felt your heart soar, and been brought back to Earth, all in the space of half an hour.

I planned to include a video from one of the instrumental numbers, "What Child Is This", but - let's just say - I had "technical difficulties". So, instead, I'd like to bring you this thought:

Don't give up Christmas.  For many our holiday season is unbelievably sad.  But it is time to act, and maybe through action, we will start to heal.

First, love your family.  Hold them close.  And then:

Gather the facts.  Examine the facts - not the propaganda that abounds all over the media and Facebook- carefully and thoughtfully.  However you then feel our country should act to insure a mass shooting never happens to another city - not Binghamton, not Aurora, not Tuscon, not Blacksburg, not Newtown....examine your heart.  And then act.  Organize.  Mobilize.  Express yourself. Be true to yourself.

We have too much at stake not to.
Posted by bookworm at 8:15 AM