Hanukkah House is a museum in Binghamton, New York, inside a Reform synagogue, which is housed inside of a historic mansion.

This museum has meaning on many different levels.  But first, a couple of observations about Hanukkah.

Over the years, Hanukkah has grown in importance, at least in the United States, because of its observance close to the Christian holiday of Christmas.  The two holidays are not at all related, however.

Hanukia (more commonly called Menorahs) are lit during the holiday in religious observance of a miracle that took place in 164 BCE (Before the Common Era, which Christians call BC or Before Christ).  Menorahs have spaces 8 candles (originally, oil lights) that are lit by a 9th candle, the shamash (servant) candle.  The shamash is placed either higher or lower than the other candles.  On the first night, the shamash and the first candle are lit, accompanied by traditional blessings. On each night, one candle is added until the 8th night, when all 9 candles burn bright.  (There is also a tradition where all the candles are lit on the first night, and then one is removed each night.) The candles are normally paraffin wax, usually colored, but can also be made from beeswax.

Hanukkah House has a wonderful collection of traditional and modern menorahs.  A fact that may surprise you is that menorahs, although used in a religious ceremony, can be decorated in many ways, many of them secular.  They are truly expressive art of the Jewish people. I can not give proper credit to the people who lend these menorahs to Hanukkah House but hope I am honoring them with my photos.

In many families children are given their own menorah and these are decorated with art that appeals to children.   Here are some menorah examples: 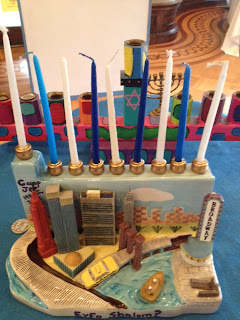 A menorah that honors the World Trade Center, and New York City.... 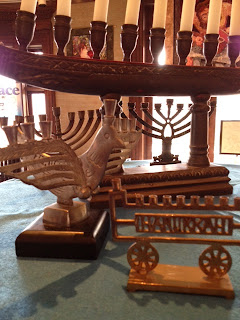 A bird menorah left) and a wagon menorah (bottom right)... 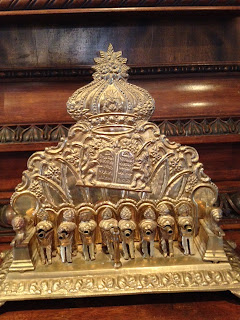 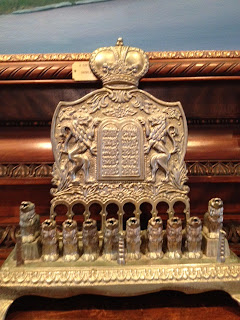 ...and two traditional menorahs, highlighting the tablets of the Ten Commandments.

But Hanukkah House is a lot more than Hanukkah, as I will show in the coming days.