Across the Universe (Sort of)

Tonight, where we are vacationing, people gathered and watched the sun setting. 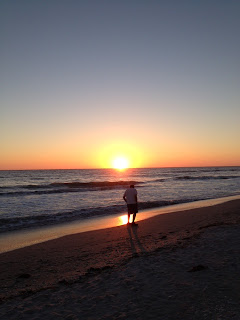 It is so different here from where I live in upstate New York.  It is still winter here, but the skies are so blue.  It is a blue that hurts the eyes but makes my winter-weary spirit sour. There is green everywhere. Flowers are blooming. (More than flowers are blooming - which will mean a post about that later in the week.) 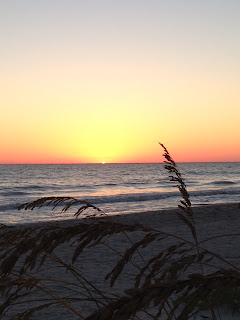 We watched the sun go down.  I took this picture at the very moment the sun disappeared along the horizon, as waves crashed in.

All things come to an end.

Later we looked at the stars.  We have so much ambient light where we live.  Here, we looked up at the stars and saw them, so bright.  We even saw the Milky Way.  We identified Orion, Cassiopeia, and other constellations.

There is a tradition among some peoples that when someone dies, the spirit of that person takes his or place in the stars.

If that is true, I know one of the new stars tonight.  Early this morning, my friend's mother, the woman I blogged about Saturday, took her last journey and crossed over to the place we will all go to eventually.  She was 94.


Her story is over, and I bid her farewell.
Posted by bookworm at 9:42 PM

Email ThisBlogThis!Share to TwitterShare to FacebookShare to Pinterest
Labels: Aging with Grace