Sustainable Saturday-Happy 90th Birthday to You

Today, a park in Johnson City, New York celebrated a special 90th birthday with a Carousel Festival and cake for visitors.

Part of sustainable living?  Yes, because these carousels build community.  A community needs activities for its young.

CFJ Park in Johnson City is one of six parks in our area who received gifts from a local industrialist and philanthropist, George F. Johnson.  Johnson grew up poor, and could not afford to ride the carousels in his native Massachusetts.  He vowed that the children of the "Triple Cities" of upstate New York would always be able to ride area carousels.  He donated six carousels on condition that they would remain free, forever.  In turn, our community has kept that promise.

All six carousels were manufactured by the Allan-Herschell Company of North Towanda, New York.

Each of the carousels has a panel showing their manufacturer.

Its carousel is the largest of the six carousels and contains 61 horses and one zebra. 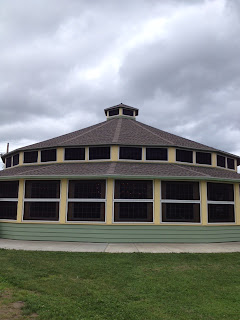 This is the structure that houses the carousel. 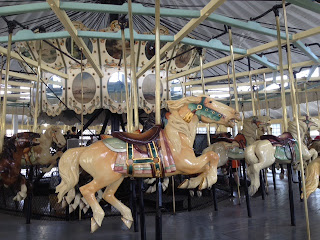 When you enter, this is what you see. 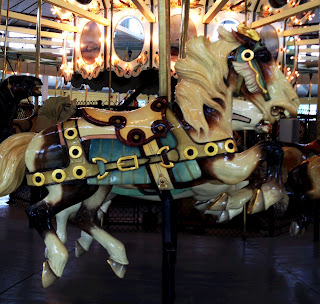 Each of the horses is decorated with "jewels" and are individually decorated so that no two are exactly the same. All animals on a Johnson-donated carousel are "jumpers" i.e. they move up and down.

Panels above the horses are all decorated.  I don't think these are the original paintings but I love this one of hot air balloons.  In another week, our community will celebrate our annual Spiediefest which includes a Hot Air Balloon Rally. 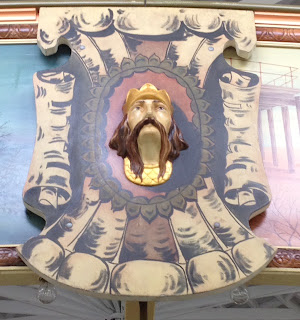 One of the heads that decorate the top of the carousel. 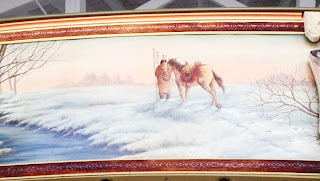 Another one of the paintings (a bit overexposed, I'm afraid).

When my son was growing up, we spent many happy hours together on the carousels and it because a Labor Day tradition, for a few years, that I take his picture on a horse.


Sometimes I think that young children in our area are some of the luckiest in our country, because they have six carousels, all free, to ride during the summertime.  It's too bad their luck runs out when they grow up and it is time for them to look for jobs - but that is a post for another day. 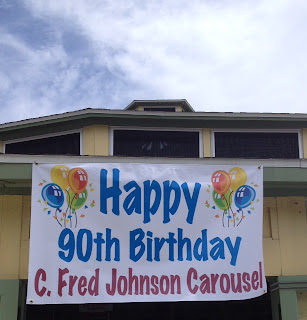 If you visit the Southern Tier of upstate New York during the summer - or are a Twilight Zone fan - you owe it to yourself to take a spin on one of these free, historic carousels from the 1920's.  And when you do, thank a poor boy from Massachusetts who grew up to delight generations of children.
Posted by bookworm at 6:30 PM