A Bridge Too Far and April Challenges

I love to walk across bridges.

In March of 2012, I tried to walk the Ravenel Bridge between Charleston, South Carolina and Mt. Pleasant.  I traveled over 800 miles to do this.  And, for the first time, I was conquered by a bridge.

I had intended to visit Charleston, South Carolina this April (no, not for the Cooper River Bridge Walk/Run) and take care of this unfinished business. Since the last attempt I have lost some 45 pounds, and I was ready to try again.

Then, in February, I had a wisdom tooth pulled, one which my oral surgeon described as being "in the worst position possible".  This, coupled with my age, made for a less than ideal pulling, and I was warned "there would be no really good outcome".   I still have what dentists call a sinus communication. In other words I have a hole in my mouth that connect directly to my sinuses.  On my last post op, the oral surgeon was not satisfied with the progress, but is going to wait a while longer before deciding if he wants to do surgery.

For a while, I had problems exercising.  As a result, I am not in the shape I would have hoped for.  But, I still intend to walk across that bridge.

I am inspired by several people I know who are facing challenges far greater.  As a result, I am taking on a couple of other April challenges - the Ultimate Blog Challenge, beginning tomorrow, and Camp NaNoWriMo.

This, with some small edits, is my post from March, 2012 describing my first bridge walk attempt.

A Bridge Too Far

But today I met my match.

My head hangs in shame.  My arthritic right knee and a steep (to my knee, that is) incline did me in.  (memo to self:  lose weight).  I had the physical fitness otherwise and the will.  And the morning was beautiful and sunny.

I did not complete the walking of the Arthur Ravenel Bridge that spans the Cooper River between Charleston, South Carolina and Mt. Pleasant, South Carolina-if you count the long approaches on both sides.
I did do about 3.2 miles (round trip) and I did a bunch of walking afterwards (on flatter paths).  But the bridge defeated me, mere days before the Cooper River Bridge Run where participants will do a lot more than the bridge.

The entire round trip, I figure, would have been about 5.4 miles. 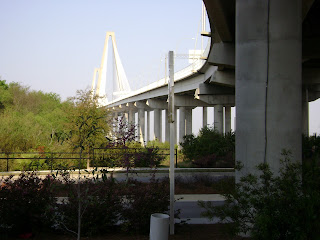 The approach to the bridge from the Mt. Pleasant side.

This is a very popular bridge.  On this Tuesday morning, there were a variety of walkers and bikers:  mothers with strollers, college students, senior citizens. 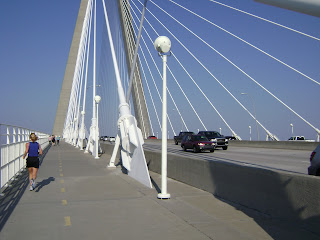 One of the many sights from the bridge is the U.S.S. Yorktown at Patriots Point. 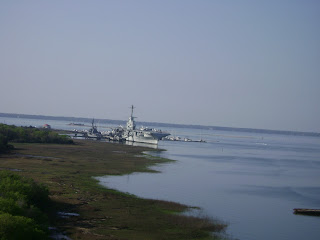 After we finished our walk we still had parking time left (you have to prepay, estimating how much time you will need) so we took a walk on the 1250 ft. Mount Pleasant Pier.  Not only was there walking, fishing, and a very nice playground, but there were benches and porch type swings  Here is some detail from a swing. 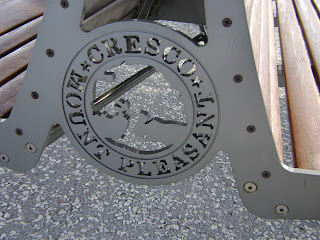 Hopefully my knee will be better tomorrow, and I will be off to more adventures.
Posted by bookworm at 6:13 AM