The Full Measure of Courage

They say that the full measure of friendship is being able to go long periods without much contact.  Several years ago, when a dear friend was a caregiver for her elderly mother, we had a period like that.  Now, I am moving into that role (her mother is deceased) with my mother in law.

I want to repeat a post I wrote a couple of years ago about that friend.  I've blogged about her several times over the years, have posted pictures of her Brooklyn garden, but have never quite thanked her for her loyal readership.

That friend needs all our thoughts right now, as she is engaged in her own battle with a relentless illness.  Her spouse, who I also wrote about below, has been the most wonderful caregiver to her, both when he battled his own cancer, and now.  Both my friend and her spouse have shown incredible courage in these years of trial for them.

I wanted them to know they are not forgotten, as they both demonstrate the full measure of courage.

The spouse mentioned in this post is in remission.

The person whose grandson is battling pediatric leukemia reports that his son is still undergoing treatment.  It has been a rough road, but the prognosis is good.

So here is a post from the summer of 2013, when my friend was already in her fight for health,  and sent an email to friends and family:


I brought the fruits of my knit/crochet project to the pediatric oncology department today. Grand total was 2 baby blankets 7 hat scarf sets, 2 plain hats, and 9 infant/toddler hats. The nurses were so excited and happy. Some good came out of some bad. I hope some children like the things I made while waiting.


As one of my other friends from childhood said "cancer and children should never be in the same sentence."  In fact, I know someone whose grandson is battling pediatric leukemia right now.  I think what my friend has done is so beautiful and I hope you will send encouragement to her and her husband in the comments.

"The spouse of my friend in Brooklyn has to spend a lot of time in doctor's offices to be treated for a medical condition.   My friend normally comes with  him and waits for him while he has his treatment - sometimes waiting an hour (or even more).

Out of boredom, she started to do her needlework while waiting.

She does beautiful crocheting and knitting work - and, recently, has been working on projects for pediatric oncology patients.

I crochet but I do not knit, and I wanted to show off her work because I know quality work when I see it.  I think the work, and the cause, is fantastic. 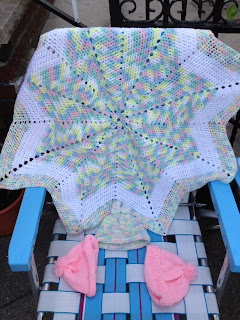 A crocheted blanket and some knit hats. 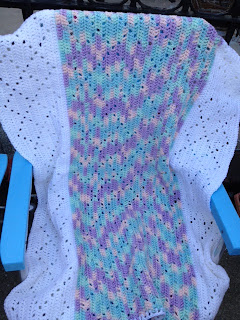 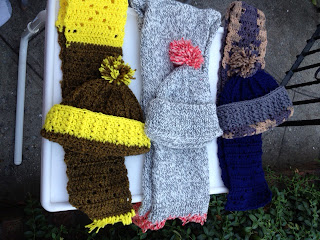 And finally, some hats and scarves.

Aren't these beautiful?  (Lately, she has had some yarn donated to her but I suspect enough of these projects were done using her own money.) We have the cliche "lemons out of lemonade" - this is about as lemony as you can get.

I've done a handful of crocheting for charity but never anything like this."

So again: Thank you, dear friend, for allowing me to publish a post  how awesome you are.
Posted by bookworm at 6:16 AM

Email ThisBlogThis!Share to TwitterShare to FacebookShare to Pinterest
Labels: crochet