It is the hour of decision.

Should I participate in an annual writing competition called NaNoWriMo (National Novel Writer's Month) this year?

I won't draw out the suspense.

This year, I am going to sit NaNoWriMo out, although my spouse is telling me that perhaps I should participate.


Rather, for the first time in several months, I am going to join a blogging challenge - the similarly named NaBloPoMo.  In that way, I can continue the daily blogging I enjoy doing (usually) through, at least, November.

No pressure, no word count, no problem!

For my Throwback Thursday, this post from October 31, 2013 is perfect - it combines Halloween decorations with my then-preparations for my second NaNoWriMo.  The fright I was experiencing is the fright all writers experience at one time or another.

Today it's Halloween.   A time for decorating, for trick or treating, for pretending you are things you aren't. And to prepare for a writing marathon.

Halloween decorations have become so popular in the United States these last few years, that you find them almost everywhere. 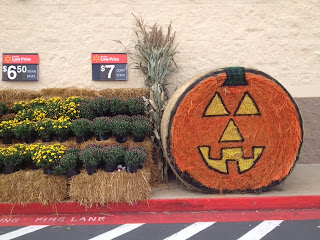 In Northwest Arkansas, for example, when I visited in August, some decorations were already up. (this was in a Wal Mart parking lot.) I loved the hay bale jack o'lantern. 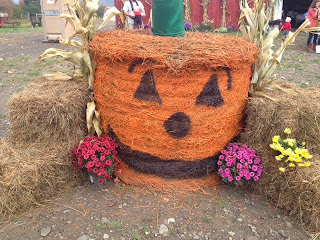 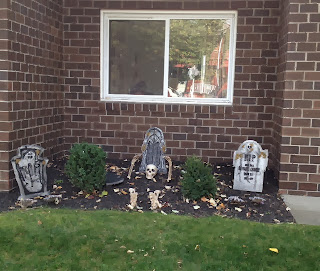 In a downtown Binghamton apartment, a space under a window has been transformed into a graveyard. 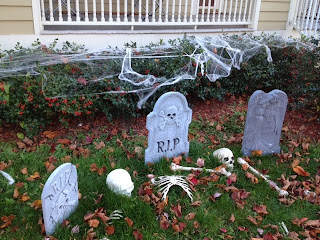 On the West Side of Binghamton, another front yard graveyard.

This is "fake" death and fright, though.  Sometimes, the scary truth is just a few hundred feet away. 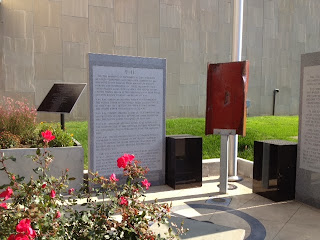 In downtown Binghamton we have a 9/11 monument, complete with a girder from the former World Trade Center.  Knowing that there are groups who would love nothing better than to inflict this kind of pain on the world (and having just done so, in Kenya, not too long ago) is truly scary.

And, there is one more type of fright.  The fright of the writer facing a blank computer screen.

Tomorrow I start my participation in NaNoWriMo. This requires me to write 50,000 words in 30 days. Last year was my first time, but this year I am actually a bit scared.  Will I be able to write 50,000 words devoted to a memoir?  I've already written some 20,000 words of memory in two previous Camp NaNoWriMos.  But this is the big time.  My reputation is at stake. I have fans rooting for me! I have writing buddies!

Gulp. Nothing Halloween can scare up for fake fright can compare with this.
Posted by bookworm at 6:03 AM