They Are The Champions

A little story about sportsmanship.

A local Little League team played yesterday for the United States championship at the Little League World Series, and my entire region of upstate New York watched.  Busloads of people came to the game, and more watched on national television.

A number of my readers are foreign, and I realize that baseball isn't necessarily the most popular sport outside of my native United States.  But please don't leave - this is not a story about baseball, but, rather, something greater than baseball.

Little League Baseball, Inc. is a non-profit organization whose mission statement includes this:

"Through proper guidance and exemplary leadership, the Little League program assists children in developing the qualities of citizenship, discipline, teamwork and physical well-being. By espousing the virtues of character, courage and loyalty, the Little League Baseball and Softball program is designed to develop superior citizens rather than superior athletes."

Which is why, when our local Maine-Endwell team won the United States championship against a team from Tennessee, we saw this on live TV: 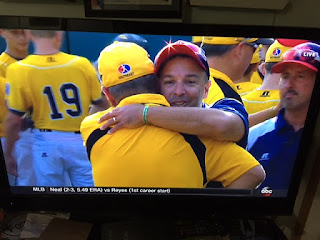 While the opposing teams high-fived each other, the two opposing coaches embraced (the Maine-Endwell coach is in blue, the Tennessee coach in yellow).

It was such a refreshing sight.  (I also knew that, 155 years ago, New York and Tennessee were on opposite sides of a civil war that took hundreds of thousands of lives.  The history lover part of me took note of that, too.)

When you saw the two teams play, it was hard to believe these were young people of 12 and 13 years old.  I would have been happy to pay to see that game on a minor league baseball level. Our own son had pursuits other than athletics, so we were not exposed to Little League as parents.  But I was a baseball fan growing up - as a spectator, that is.  My spouse still is a fan.

When I was growing up, girls were not permitted to participate in Little League baseball.  But that changed in 1974. 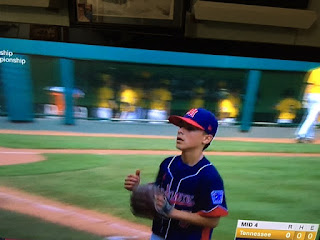 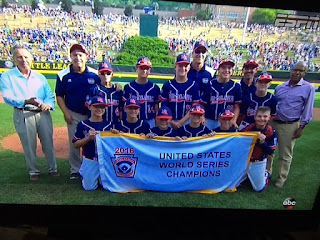 Here is the happy team posing after the game.

I applaud any organization that stands for ideals of good sportsmanship.  To see those ideals in action and to know your local team was one of the participants is even better.

Today, Maine-Endwell plays for the world championship.  You'd better believe many in this area will be watching that game at 3pm Eastern Daylight Time.

Did you play sports as a child?
Posted by bookworm at 8:21 AM