In 2011,  I took my first trip to Charleston, South Carolina and immediately fell in love with the city.

Now, in the aftermath of the snowstorm that hit the Southern United States, and drove temperatures in Charleston down to record levels, Charleston is on my mind.  I had come close to visiting it this month, but it never happened.

In that visit we had a wonderful location and easy access (an easy walk down the narrow sidewalks of the historic Ansonborough neighborhood where we stayed) to the Charleston City Market. 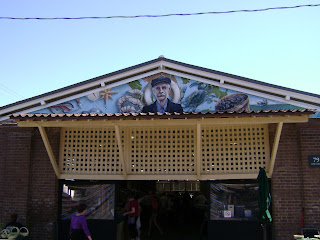 The Market consists of several open buildings in a four block area. These are the entrances to two of the buildings, as they appeared in 2011.  If you had watched coverage of the Charleston snowstorm, you saw this market. 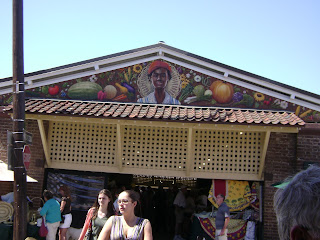 The Market (at least, when we visited in March of 2011 and 2014) is not primarily a "farmers market" and not all the goods are locally produced, either.  But we had a wonderful time talking and interacting with some of the local artists, and went back several times.

One product that is local, and a revival of a historic heirloom food, is Carolina Gold Rice.

What we bought was grown locally and distributed through Charleston Specialty Foods. The distinctive yellow cloth bags packages of this rice are sold by several vendors at the market, and also are for sale at various historical venues throughout the Charleston area.  As the bag explains:

"In 1685, a distressed merchant ship paid for repairs in Charleston with a small quantity of rice seed from Madagascar.  Dr. Henry Woodward planted the seed in South Carolina, beginning the state's 200 year history as the leading rice producer in the United States."

So why should you pay a lot more for an heirloom variety of rice than the plain old (I won't mention any brand names) stuff you find on the supermarket shelves?

For various reasons, including the freeing of enslaved populations whose labor had permitted the cultivation of rice, rice farming had slowed in the South Carolina low country. The Carolina Gold Rice Foundation is attempting a comeback for this rice, and as the bag also explains "We are proud to be South Carolina's first product made with Green-e Certified Renewable Energy."

So how can you go wrong?  In one swoop you encourage the production of heritage foodstuffs, and support renewable energy and sustainable agriculture.

The rice can be ordered online and they ship on - why not? Tuesdays. (I just offer this for information; I am not receiving any compensation for this.)

So, how does it taste?  And what is the rice like?

I would judge it as medium grain.

It's definitely distinctive, and delicious.   Spouse (our family cook) made a pilaf with it.  It came out fluffy, and nice.  To me, it also tastes like butter was already added to it.

And the best part? One of my cousins in my recent Florida visit had tasted Carolina Gold Rice and had much the same opinion.

I think South Carolina has a winner here.


Join Bellybytes at Mumbai on a High and Shilpa Gupte at Metanoia for their linky party at #FlavoursomeTuesdays. If you want to share a food related memory, why not join us?