An Inside Look at Voting

Yesterday, I overheard a conversation between two women in Binghamton, New York.


Woman #1 (to woman #2):  did you vote?
Woman #2 (who answered, and then she proceed to reminisce about a time when she had young children, and had to take them, a diaper bag, and various amusements to the polls so she could exercise her right and duty.)


Last month I saw a news article about the state of Oregon, which has mail-only voting.  Having lived much of my life in New York State, which has only same day voting and absentee ballots offering only five excuses, a mail ballot intrigued me.  I was even more intrigued to find out that Oregon has been doing it for 18 years - since 2000.

In fact, three states in our country now have mail only voting: Oregon, Washington and Colorado.

And now...heart, stop fluttering - I know (through blogging) an Oregon Ballot inspector, Haralee.  Better yet, I got to read her 10 Tips on Vote by Mail. (more on her "tips" later).

(I'm also happy she doesn't live in Broward County, Florida, where they are having that massive recount of some 700,000 ballots, surrounded by claims of incompetence and possible voter fraud.  In fact, I had just finished a discussion with my spouse when I decided to read the Oregon post.)

Haralee asked, at the end of her post, if anyone reading her post had ever worked an election.  I haven't, but one of my immediate co-workers has, for the past several years.  She takes (vacation time) the day off and works a poll shift that begins at 5:30 am and ends at 9:30 pm.

The poll workers in New York have a multitude of duties, which include verifying everyone coming into vote, writing their name and number (each voter is counted) on a pad of paper as a double check,  helping those whose ballots aren't being accepted by the machine, helping those with disabilities, and so forth.  At each table, when you sign in, there must be a Republican and a Democrat.  They each must wear badges identifying which party they belong to.

It was an exhausting, grueling day for my co worker, which ends only after the last vote is cast.  A part of the machine has to be taken out, under supervision, and delivered to a worker who drives from precinct to precinct, collecting these parts and putting them immediately into a locked bag that he or she has no access to. (In other words, the machines are not directly hooked up to the Internet).  The machines are then (by someone else) impounded.   There are many checks and doublechecks to make sure the vote is not corrupted.

My co worker did all of this for $11 an hour.   The minimum wage in our county, incidentally, is $10.40 an hour.  So these workers defending (in a way) our democracy make barely above minimum wage.

One of the polling places in my county was the local Jewish Community Center, which required extra security for the saddest of reasons.

But turn out people did - in record numbers.

So, back to the 10 tips Haralee in Oregon gave.  After reading it (and chuckling at some of her comments, which weren't that funny but you do have to wonder about human nature), I can see where many people don't take the act of voting that seriously.    And really, no matter where you live, don't write in Jesus, Mickey Mouse or Spider-Man (RIP Stan Lee) either.  She explains why it is not funny at all, and costs taxpayers money. 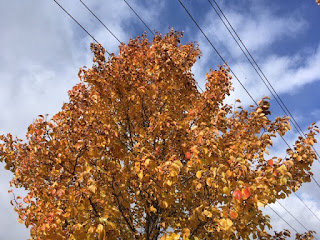 Today, I am waking to our first sticking snow.  The color season is just about done.

I wish I could vote for more of it.
Posted by bookworm at 6:20 AM

Email ThisBlogThis!Share to TwitterShare to FacebookShare to Pinterest
Labels: voting