My Blog Through Another's Eyes

Last month, a cousin who lives in another state texted me, asking if she could call me and talk about blogging.  She had retired earlier this year and I believe she is attempting to re start up a business she had done part time while teaching for a living.  She knew I blogged, but was not a reader.

After a couple of false starts we made contact, and I answered some of her questions.  The most interesting part, though, was when  she asked to see my blog.  We both surfed over to it, and it was interesting to see my blog through someone else's eyes.

I explained each of the elements, and we talked about different blogging platforms - not a long conversation, as I only am familiar with the one I used.

Meanwhile, last week, I received an invite to join the October edition of the Ultimate Blog Challenge. One thing I suggested to my cousin is that she join a blogging challenge.

What else would I recommend to her, as someone who has been blogging for over 10 years now?

Not that I'm any kind of expert, mind you.  Just because you do something thousands of times doesn't make you an expert.
Just as me taking snapshots doesn't make me a photographic expert.

I would tell her, and you, APPRECIATE YOUR READERS.  There are millions of blogs out there (I've seen a figure of between 500 and 600 million. Blogs.  That's right.).  You've come to my blog.  You've gotten to this paragraph.  Thank you!

But for her, that means there is an awful lot of competition out there.  Which leads me to point #2:

I would tell her don't bother blogging if the idea doesn't excite you.  I still love blogging. I don't try to earn money.  I do what I like to do and hope my valued readers (and I do value them, and their comments, more than you'll ever know) like what I am doing.  Having said that, what I am going to say next may surprise you.

I tried, gently, to discourage her.  Well, not discourage her, but I told her about some of the downsides.  Fighting spam.   Ignoring trolls.  The world of social media can be rewarding, but it can be a place of pain and, sometimes, danger.

And third, a lesson hard learned for me back in April: don't depend on Facebook to publicize your blog.   Someone (a troll, who knows?) reported me as a spammer, which led me to some interesting experiences.  Overall, it turned out to be a positive experience, not that I am going to thank said troll.

Why?  Because it taught me a valuable lesson.  Be prepared to walk away from Facebook.  I lived without social media for most of my life (I'm a senior citizen) and could do it, I know now.  Social media has its place in my life, but that's all it is - a tool.

Despite having to drop out of the July UBC because I couldn't post on their Facebook page, I plan to join the October Ultimate Blog Challenge, now that I am in (I hope) Facebook's good graces again.  In the meantime, my cousin hasn't created her blog.  Yet. 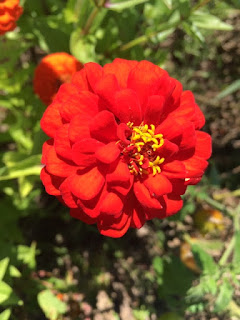 But one day she might.
It would be fun to watch her grow and bloom, wouldn't it?
Posted by bookworm at 6:25 AM