As promised the other day, I'm reporting on my Blueberry Clafoutis experiment.

I am not a baker.  I was as a teen, but I abandoned scratch baking a few years ago.  When the March lockdown came, I never indulged in quarantine baking.  In fact, I lost weight.  But now, the baking urge has returned.  It's not the best thing in summer.

Since I'm on Weight Watchers (WW) and try to be good (we'll ignore the half bag of pretzel crisps I stress-inhaled the other day), I strive for low point recipes.

Clafoutis is a French creation, a fruit tart made with a sweet batter.  And, best of all, it sounded really easy.

So, of course, I had to start playing with a recipe I hadn't ever made, but that's how I roll.  (And that's why I don't have a cooking blog.)

The recipe had cottage cheese in it.  Why, I don't know (someone who is good at baking will need to explain that) but that was perfect for what I needed to do.

(I know, some of you are probably already horrified.  If you are, I suggest you quit here before I further horrify you.  I had a really nice flower post on Wednesday and you might enjoy that post instead.)

For the brave souls who remain:

I had cherries, but felt lazy (and didn't want to spend time depitting), so I used blueberries I had picked the day before.

The recipe called for eggs.  But the chicken eggs I had seemed a bit small so, for one of them, I substituted a duck egg.  I happen to love duck eggs in baking.

Finally, the recipe called for butter to grease the pie pan with, and I don't keep butter in the house.  I used cooking spray.

Anyway, you'll need a 9 inch pie glass pie pan, which I did have.  So this is sort of a combination of two recipes, and my playing around.  If you try to make it, and don't like it, please blame me.

1.  Preheat oven to 375 degrees.  If you have butter, grease the pie pan with about a teaspoon.  Otherwise, use cooking spray.

2.  Put about 1 1/2 cups of blueberries into the bottom of the greased pie pan.

3.  Whisk the following together in a bowl: 1 cup almond milk, 1/2 cup small curd cottage cheese, 1/3 cup sugar, 1/2 cup flour (used white whole wheat, since that's what I had), 1 tsp vanilla extract and 3 eggs.  The cottage cheese I used was 2%.  The almond milk was unsweetened plain.

4. Pour over the blueberries. 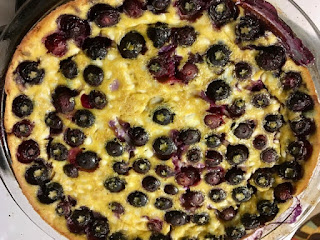 5.  Bake 40 to 45 minutes. It should be golden when removed.  It will be puffed, and will fall a little as it cools.  Some, because of this, will serve the clafoutis immediately.  I intended this for an after supper dessert, and baked it after lunch, so it sat around a bit.

It can be served warm, room temperature, or (if you wish) cold.  Refrigerate if not used up right away.

So, how did it turn out? 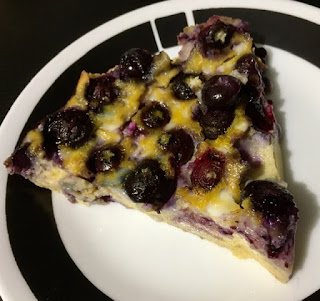 I loved it.  I must note I've never had clafoutis before but I am sure going to have it again.  It was nice and tender, and tasty.

I figured on my WW plan, which does not count points for eggs, if I cut into eight pieces, this was only three Smartpoints each piece.  For six pieces, four Smartpoints.