I did not start out to blog about a shooting tragedy, but it is ironic, in a way, that I planned this post before the news of the shooting tragedy earlier this week at Oregon's Umpqua Community College.

We in Binghamton, NY, a small city of about 47,000. in upstate New York near the Pennsylvania border, suffered our own adult classroom shooting tragedy on April 3, 2009:  13 dead, plus the shooter.  Sadly, there have been a good number of mass shootings since that day.

A hero of the Umpqua shooting was a 30 year old military veteran, Chris Mintz, who had a chance to escape. But, instead, he ran towards the gunman and barricaded a door trying to deny entry to the gunman.  Mintz was shot many times by the shooter (whose name I refuse to mention).

Both of Mintz's legs were broken, and rods had to be inserted.  He was shot in the hands and abdomen.  He was hit in the back and he will carry a bullet in his hip for the rest of his life.  He will have to learn to walk again.

Mintz was attending classes at the college to become a physical therapist, to help others.

The day of the shooting was his son's sixth birthday.  His son is developmentally disabled with autism and is non verbal.  By all accounts, Mintz is a loving, hands on father.  As the paramedics attended to Mintz, he kept telling them it was his son's birthday.

It will be a long road to recovery for Mintz, and, at the same time we all mourn the nine innocent who died.

We had acts of heroism in our shooting, too.

One of the dead in the Binghamton shooting was a 72 year old teacher, Bobbie King.  Besides her work at the American Civic Association, where the shooting took place, she put in countless hours of volunteer work at Hanukkah House, the Binghamton museum I have been blogging about the past few days.

Every year, portions of her collections of dolls and dollhouses would go on display at Hanukkah House for the enjoyment of the community. There is nothing said in the descriptive material about Mrs. King, but her doll collection was a legend in this community. 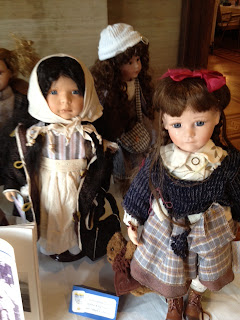 Since Ms. King's untimely death, her family has graciously continued the tradition of displaying some of her dolls and dollhouses.  When I view these dolls each year, I can almost imagine them crying over the tragedy that took their owner's life.  We like to say that good comes from bad, though, and I like to think that these dolls are celebrating Bobbie King's life and all the people whose lives she touched in her 72 years on Earth.

Looking into Mrs. King's dollhouse, you see a world in miniature.  If you didn't know better, you might think this was a room in a mansion taken from above.  The detail is incredible. 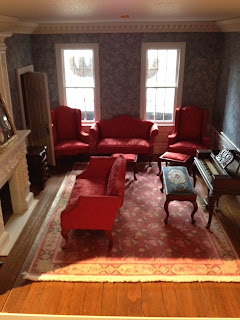 Here, you see a set table with a miniature tea service. 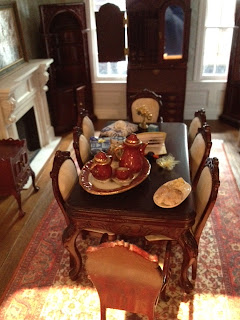 And here, a bedroom complete with crocheted coverlet. 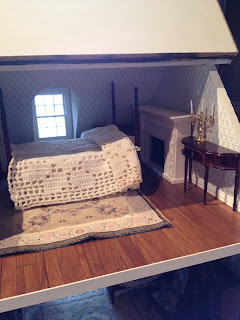 Sadly, once again, we have a situation where innocent lives were again taken by....who?  why?  The purpose of this blog is not for me to have a platform for my personal opinion. But, once again, I ask, will we in the United States have the will to find a way out of this?
Posted by bookworm at 9:18 AM