Yesterday, we got the first snow accumulation of the winter.  Given I live in an area that can get upwards of 120 inches of snow (in the metric system, that translates to "lots of snow"), that shows what a different winter we have had. 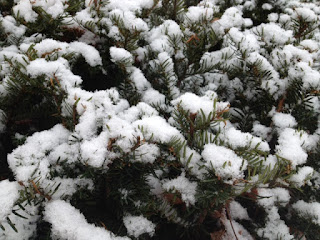 It isn't just us (and if you want to see our totals, check out the stats for "Binghamton".)

When I moved to this part of upstate New York in the mid 1980's this was a normal sight by October.

In the United States, Powerball is a multi-state lottery.  Residents of 44 states, plus the District of Columbia (our capital is not in a state) and a couple of other American entities such as Puerto Rico and the U.S. Virgin Islands, participate in Powerball.  Every Wednesday and Saturday night, a series of numbers is drawn.  If you purchase the winning ticket...well, you've won a lot of money.

Maybe, because of taxes, it isn't as much as you think.  And the odds of winning are not great.  Since sometime in November, there has not been a winner.  So the jackpot has grown, and now is around 1.5 billion dollars U.S..  As in "billion".

1.5 billion U.S. dollars translates into a lot of money.  Just think.  Designer clothes.  A fancy car.  A fancier house.  Gourmet food.  Servants.  World travel.  The end of your problems.    Doesn't it sound nice?  (By the way, if you are reading this outside of the United States - yes, you can buy a ticket.  Although, I'm not suggesting it.  Why?  Keep reading.)

So, at work yesterday, the topic was "have you purchased a Powerball ticket?"

Years ago- to be exact, over 30 years ago- I knew someone, on a professional basis, who won the New York State lottery.  I'll spare you the details, but it did not end well for him, or his girlfriend. They ended up in court, suing each other over who purchased the ticket, and if the other party had been promised half the winnings and...I have a feeling, by the time it was over, that he wished it had never happened.

He is not alone in wishing he (or she) had never won, if you believe a major New York City newspaper.  Bankruptcy rates approaching 70%..drug overdoses...even winners being murdered.

I speculate the disasters following a lottery win are due to a combination of factors - not knowing what to do when you receive a large sum of money, greed, and losing judgement.  We all say "oh, it won't change our lives; we'll be the same person."  Or "I'll give most of it away".  Wrong.

Still, I don't envy (that much) the people who will win tonight - if there is a winner.

I decided I would rather spend the money on a high quality dark chocolate bar, although a losing Powerball ticket, I figure, has fewer calories.  I'll take obscurity, and happiness, over the misery of winning the lottery.

What about you?  If you live in a place with Powerball, did you buy a ticket for tonight's drawing? Do you have a plan for if you win?  If you don't play lottery games, why not?
Posted by bookworm at 6:13 AM