Today, on the last day of Hanukkah (the Jewish "Festival of Lights"), I made my annual visit to Binghamton, New York's Hanukkah House museum.

Hanukkah House is a teaching museum inside of Temple Concord in Binghamton, in upstate New York, about 150 miles from New York City.   It exists to teach both the Jewish and non-Jewish community of Binghamton about Jewish culture, and more about the holiday of Hanukkah (there are several alternate spellings), which commemorates the rededication of the Temple in 165 BCE (Before the Common Era, which corresponds with the Christian BC, "before Christ") in our common Western calendar.

Hanukkah, the Festival of Lights, commemorates both the ending of a war for religious freedom and a miracle that occurred when the temple menorah was lit.  With only enough oil to last one day the menorah burned for eight days, until more oil could be located and brought to the Temple.

The museum features an exhibit of Hanukkiyah, the candelabras used in Jewish homes to hold Hanukkah candles.  (these are commonly called menorah, but a "menorah" is a specific type of lamp different than what the usual Jewish household would use.) 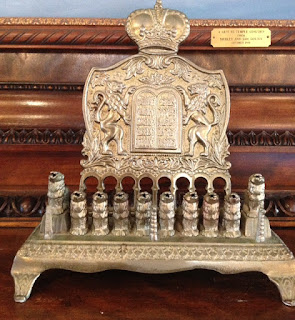 Some of the hanukkiyah in the museum are old, and beautifully decorated with religious symbols. (This one, also, instead of the nine candle holders normally found- one for each day of the miracle and a "helper candle" that is used to light the other candles) has 10. 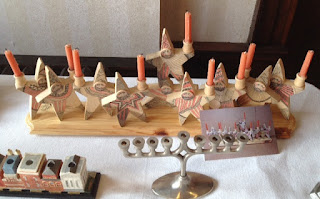 Hanukkiyah don't have to be decorated with religious symbols.  Instead, especially for those used by children, they can be whimsical. 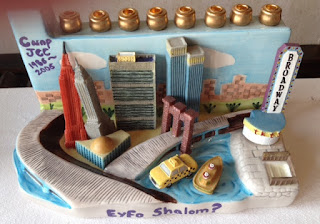 Or, they can commemorate, as this summer camp made menorah does.  This commemorates the New York City of pre-September 11, 2001.  (My finger blocked out the raised "helper candle" holder at the upper left.)

Later this month I will feature Part 2 of this year's post about Hanukkah House - a special collection by a special woman whose life (and death) holds much meaning for the future of our nation.
Posted by bookworm at 5:28 PM