Love Texts In The Sand

How many of us have love letters in a box on a high shelf in one of our closets?

The most poignant love letters are the ones written by loved ones separated by war.  When we were helping my mother in law downsize last year, we found a couple of letters written to her sister by the man she ended up marrying.   He was in the military; she was back home in suburban New York City.

This 1957 hit by Pat Boone, "Love Letters in the Sand" was written in 1931, and talks about a man broken hearted by the breakup of his relationship. 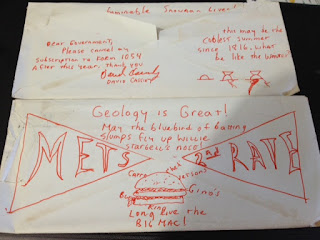 So, what about my love letters?

My spouse and I were a couple of college students, in our late teens, when we met in 1970.  During periods of separation, we wrote each other.  And yes, I still have those letters.  Here's the back of two of them.

We married, and a couple of years later, he went into the military.  Our letter writing started up again.

Now, it's been nearly 42 years since we've been married.  I hope we can grow old together.  The boy who drew the pictures on that envelope has a face lined with wrinkles now.  His hair is starting to grey (mine greyed years ago) and he has a bald spot on his head.  We aren't the people who wrote those letters.  We are older; I hope we are wiser.  Perhaps our lives did not go in the directions we dreamed of once, but it has been a good life together so far.

One day, I know my son (who is in his 20's) will be cleaning out our closet (I promise it will be less cluttered than it is now), and I wonder what he will think when he finds those letters.

No one will ever read his letters, though.  I doubt he has ever written a letter in his life.

Instead, he may have written love texts. Here today, gone tomorrow in a "poof" of electrons.  Written on the sands of Verizon cell phone service in a flurry of moving thumbs, they will wash away one day in a tidal wave of millions of other texts.

Will we be poorer for the disappearance of love letters?  Perhaps.  But none of us know what the future will bring.  If you want to try your hand at writing a love letter, here's some advice from the New York Public Library.

Did you ever write love letters?  Do you still have them?
Posted by bookworm at 10:57 AM