The Rose Parade has taken place for 127 years now in Pasadena, California, usually on the first day of January.  (It is not held on Sundays, so on days where January 1 falls on a Sunday, like this year, the parade is held on January 2.)

I watched it, thousands of miles away, at my home in upstate New York

Creating a float takes hundreds of hours and lots of determination.  The rules seem simple - floats in the parade must be covered in natural materials.  So, every visible surface on every float you see is decorated in flowers, bark, seeds, walnut husks, or other natural materials. Flowers, seeds and more must be glued on individually.  Some materials are so fine that volunteers use tweezers.  Since most of the materials are perishable, they must be installed on the floats hours or days before the parade, by hundreds of volunteers.

The work is tedious - but, look at what this determination produces. 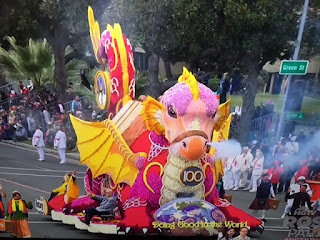 This float was called Doing Good in the World. 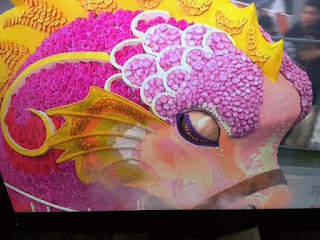 In this closeup, you can see some of the natural materials. 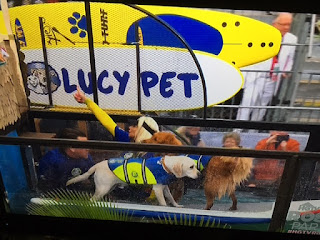 There are two other floats I would like you to see.   One float featured surfing dogs.  Yes, several dogs surfed, on real water, carefully monitored by handlers.

The float with the dogs was the largest and heaviest float ever in the Rose Parade. It is successfully rounding a corner which lessor floats have become hung up on. 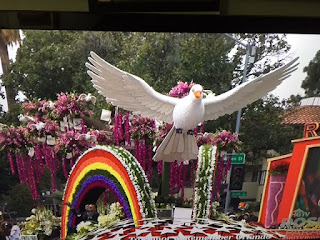 The other float paid tribute to victims of a tragic shooting last year at the Pulse nightclub in Orlando, Florida.  Several survivors of the shooting rode on the float.  Doves were released to honor the 49 dead.  A large flowered dove hovered over the float. 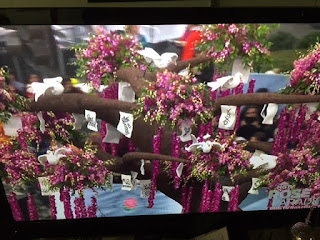 It was a beautiful tribute, but sad, knowing that so much violence still remains in the world.

A lesson in determination for day 3 of the Ultimate Blog Challenge.
Posted by bookworm at 6:19 AM