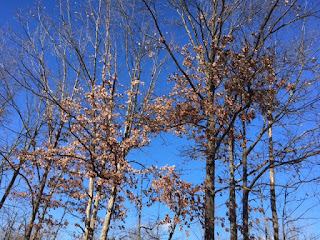 What a day to take a walk in the park.  Or, if not in a park, on a walking trail.

My spouse and I occasionally exercise walk on the Vestal Rail Trail in nearby, Vestal, New York.

From time to time I've enjoyed taking pictures of wildflowers on the trail, and have even taken pictures of a creature or two.

But normally, I don't walk on the trail that much in the winter.

Wednesdays on my blog are a day of seasonal meanderings.  Winter is a time of snow where I live.  I have several readers who live in areas that don't get snow,and want to see snow. 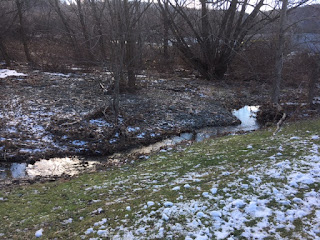 This New Year's Day, though, not only was the trail itself free of snow but, in some of the small natural areas, water was running and snow was melting.

Then, yesterday, it rained for most of the day. And today, I am waking up to relatively warm temperatures ahead of a cold spell.

What a way to start the New Year.

Day four of the Ultimate Blog Challenge.
Posted by bookworm at 6:27 AM