Every gardener has his or her impossible dream.  Some of us try to grow a plant that the experts say just can't be grown, just to see if it could be done.

Years ago, when my spouse was in the military, we were stationed in Wichita, Kansas.   There, we met a fellow airman, Jim.  Jim had grown up in West Virginia.  He missed two things terribly:  bluegrass and azaleas.  Neither grow well in Wichita, a hot, windy climate.

Jim tried.  And he failed.  But he tried.

For me, in zone 5b upstate New York near Binghamton, the impossible dream is the camilla, a beautiful flower that is not supposed to grow here.  The climate isn't right.  It gets too cold.  I thought I saw one once in Brooklyn, although it was past the blooming season.   But Brooklyn is in hardiness zone 6b.  I've never seen one here in the Binghamton area.

So, of course, spouse and I decided we had to try.

In April of 2015, my spouse and I traveled to a camilla nursery in North Carolina where they specialize in cold hardy camillas.  We bought one, called April Rose.

In 2016, despite animals (we suspect squirrels), our camilla bloomed, for the first time, on upstate New York flower buds.

But, after that, buds never grew in the summer of 2016.  I suspect the plant isn't getting enough sun in our back yard, where we had to put it so it would have a chance to survive the winter. 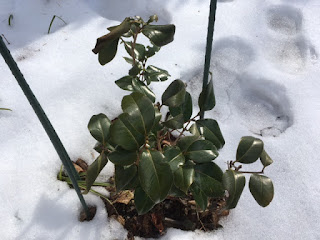 This is what our April Rose looked like on February 18.  No buds.

It will not bloom this April.  Maybe, buds will grow or next year.

You know what?  I'm still dreaming that impossible dream, that April Rose will bloom again for me one day.
Posted by bookworm at 6:20 AM