An exhibit on Jewish Food all over the world at a local museum led me into today's memory. 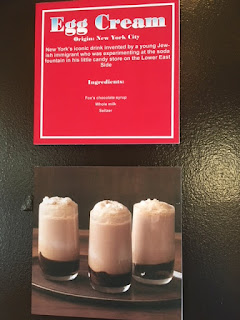 Somewhere around the turn of the century (the 20th century, that is), a Jewish immigrant in Brooklyn created the first egg cream in his candy store.  It wasn't my grandfather, although he was one of many such immigrants who owned these Brooklyn candy stores.

Never mind the turn of the century.  Few people grew up in the New York City of the 50s or 60s (and beyond) without falling in love with this drink.  You didn't have to be Jewish or of any special nationality.  I think drinking this was pretty universal among New Yorkers.

There are three simple ingredients (none of which are eggs or cream) in a classic chocolate egg cream, yet, it takes certain conditions to make a perfect one.   These are the ingredients:

Ice cold whole milk  (it must be whole milk, or you won't get the head)
Seltzer, ideally commercial seltzer under pressure
Fox's U-Bet chocolate syrup


Your milk must be icy cold.  You can use chocolate syrup other than Fox's, but it won't taste the same.  And, if you don't have soda fountain type seltzer, you can use the bottled stuff.  But again, it won't be the same.  You can order Fox's U-Bet syrup online, by the way.

Here is some information on the history of the egg cream.

Now, in my imagination, I walk into my local candy store in the Bronx, which was called Manny's.  On weekdays, Manny would sell my Dad the New York Daily News, already saved for him and rolled up, which my Dad would take on the subway and read on his way to work.  On weekends, my Dad might take me to Manny's for an egg cream.

In my imagination, I sit on the round, green, padded stool next to the stack of soft pretzels and ask Manny for an eggcream.

I know the drink must be consumed right after it is made, or the creamy head will disappear.  On a hot summer day (the door to Manny's is open - it wasn't air conditioned) it was so refreshing.  I sip the egg cream, served in a glass decorated with a Coca-Cola label.  The cream foam top tickles my lip, and I take in the cold, milky goodness and the chocolate heaven of Fox's U-Bet.

Manny's is long, long gone.  I haven't had a true New York City egg cream in possibly 20 years or more.

Join Bellybytes at Mumbai on a High and Shilpa Gupte at Metanoia for #FlavoursomeTuesdays.And, my apologies to Shilpa Gupte for mangling her last name.
Posted by bookworm at 6:31 AM