In 2006, I rode the Auto Train for the first time. I traveled with my family from northern Virginia to just north of Orlando, Florida one August.  (I've made this train trip south several more times now, the most recent trip being about three weeks ago.)

I've never slept well on the Auto Train, and something happened on that first trip that became a tradition.

I woke up from a fitful sleep to realize we were traveling through a city.  We were passing under an Interstate, and some large billboards were visible.  One billboard, lit up, advertised "The Crab Shack. Tybee Island."

I didn't have Internet access and had never heard of Tybee Island. But I researched it as soon as I could and found it was an island close to Savannah, Georgia.

The second trip, 2009:  I woke up from a fitful sleep, and as my spouse softly snored next to me, I peeked out of the window and saw the very same sign.

On our third trip, in March 2013, we both woke up as we were traveling through Savannah, and my spouse spotted the sign even before I did.  Marveling at this huge (to our sleep-bleary eyes) sign, we decided that yes, we would go to the Crab Shack.  We would fill in this hole in our travels on the way back (by car, this time). 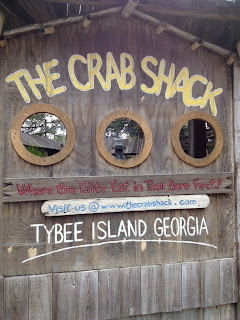 From the outside, it looks a bit like a "tourist trap".  But the food (noting I do not get compensated for this or any other review) was very good. 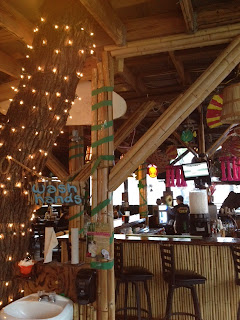 Inside, I noticed the restaurant had open walls to the outside - with only a screen between diners and the great outdoors.  If only I could live in a place like that, said my winter-starved inner voice. 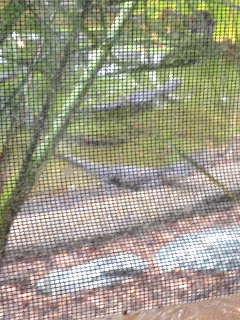 Not so fast, said reality, as I saw movement outside the screened in wall.  Can you see what I saw? 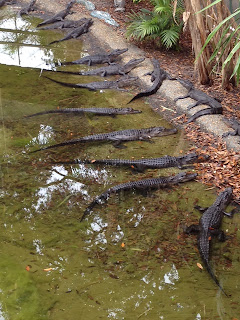 After lunch we went outside, to see some of the 78 alligators the Crab Shack owns. These are all domestic, as in "born in captivity".  The Shack does not tolerate any abuse of the gators by customers, but they were easily accessible (if someone dared) and I hope they have good lives. 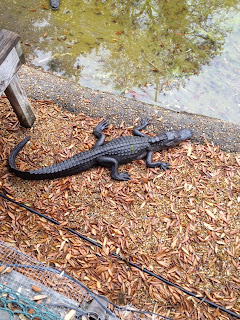 Up close, they almost look fake - but they certainly were not fake.

Postscript - our next trip to Florida was in January of 2018.  We took the Auto Train both ways.  On the way south, we never saw the sign.  Returning home, we did.  It was a different sign, but we think it was in the same place.  Seeing that sign gave us so much comfort.

So I did what any blogger would do.  I emailed the restaurant.

And the next day I received a response!  I hope Stephanie doesn't mind me quoting from the email.

"Thank you for contacting us!  We are happy to hear that our billboard is so eye-catching to you, and that you have so many fond memories of dining with us!  Rest assured, our billboard is still there - perhaps it was down at the time of your last travel for replacement.  The elements can be quite harsh on the vinyl used on the billboards and they do occasionally need to be updated and replaced.  Be sure to look for it on your next trip, and we look forward to your next visit here with us on Tybee Island!" (along with this was an offer to visit their website and see a shipping special they had for a special Valentine's Day meal.)

Stephanie, you bet we will be back!
Posted by bookworm at 7:02 AM