Many times, in the Civil War, it was the generals who got the credit.  These generals are the people we remember:  Grant, Hooker, Lee, Early, Jackson, Custer, and so many more.

In a small way, I would like to remember someone, someone I suspect few people in this area know about.  He was a man born in Scotland, who fought with the 137th NY Infantry regiment, a local Binghamton infantry regiment- Colonel David Ireland.

How did I find out about Colonel Ireland?  No, not from a monument in the center of the city of Binghamton, because he doesn't have one. No, rather, there is a Civil War monument by the courthouse in downtown Binghamton, with the names of a lot of famous battles. 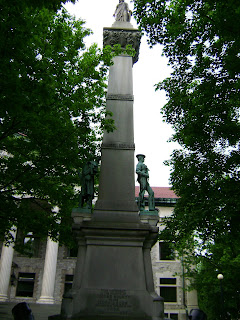 I don't even know if he is taught in the schools here. (the Johnson City schools, though, did spend a lot of time on the Johnson family the village is named after).  No, what happened was:  I found a book in the New Books section of the Binghamton library: Faces of Fame and Glory, written by a local author-who grew up in Gettysburg, PA.  It's a pretty thick book, and is not meant for casual reading, but I highly recommend it.  It is written from letters written home by soldiers, and other source material.  I do not have that level of scholarship (far from it) so I will just try to summarize.

David Ireland was an immigrant from Scotland, who lived a while in New York City.  He seemed to be successful at whatever he tried, pre-Civil War.

David Ireland had already been in a militia regiment made up of immigrants.  After war broke out, it was mobilized.  Fighting with the 79th New York, he was at First Bull Run (First Manassas), and his leadership skills were recognized.  The future colonel was put to work training troops.  In the summer of 1862, he trained "his own" regiment:  the 137th NYSV.

The 137th trained at Camp Susquehanna, near the site of the present day Park Diner.

Colonel Ireland was one of these people who (like diarist Mary Chesnut) seemed to be in the "right place at the right time".  Until he wasn't.

He fought with the 79th New York at First Bull Run (First Manassas), whose 150th anniversary is coming up July 21st.  Later, with his own regiment, the 137th NY, he fought at Culp's Hill at Gettysburg July 2 and 3, 1863.   The 137th isn't given full credit by history, but it had a larger part in winning Gettysburg for the Federals than many people realize.  Gettysburg, PA was the "high water" mark of the Civil War, the furthest into Northern territory the Confederates were able to penetrate.

In one of the ironies that mark war, the 137th lost 137 men at Gettysburg.

After Gettysburg, Ireland went on leave, and got married., to a young lady from the prominent Phelps family.  They had no children.

Ireland fought in so many famous battles, I will not bore you with a listing, except when you realize the battles ranged from Virginia, to Pennsylvania, more Virginia, to Tennessee (where he fought at the Battle of Lookout Mountain, among other battles), and to Georgia with Sherman and the "march to the sea".

I suspect that if he had survived, he would have been quite a force in the post war history of the Southern Tier.

In an era where so many people didn't travel far from when they were born, that sounds like an amazing story.  Except, for the soldiers of the Civil War, it wasn't.  His story of travel through much of the then-Confederacy was not unique, and some historians believe that this experience led (in part) to our country becoming a world power.   These were not travels on interstates in his car.  These people saw and experienced their country.  (that is a story in itself, for perhaps another time.)

There are lot of Civil War sites on the Internet, and I invite you to visit them.  This has some very good information if anyone is interested in the role of New York soldiers during the Civil War

And what about Civil War sites in the Southern Tier?  There are a number, including the prisoner of war camp in Elmira, which I hope to make the subject of a future Civil War Sunday.
Posted by bookworm at 8:15 AM