The Return of the King of Small Towns

The last time I was in Owego, NY, a small town about 20 miles west of Binghamton, it was the Columbus Day weekend.  Spouse and I drove by a man working in front of his house.  It was a lovely fall day, crisp and sunny.  In front of his house was a neat, carefully lettered sign.

The man was wearing a white face mask and was working on gutting his house.  Nearby, debris was piled high.  Sadly, such a familiar site.  But as we passed house after house, the same sad scene presented itself.

Owego has had a horrific last nine weeks, since the floods of September 7 and 8 due to Tropical Storm Lee.  In Owego's case, it is near the Susquehanna River, and epic rains produced epic flooding.

But today, Owego announced its return, opening its doors (so to speak) to visitors for its annual Holiday Showcase.   What a welcome it was - sunny skies, highs in the 50's, a lot of flood recovery process in the past month, and many businesses once again open. 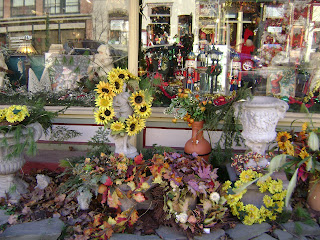 Outside The Hand of Man, an Owego treasure.  It was decorated for Christmas, and my spouse, who normally doesn't get into Christmas decorations, browsed the aisles and admired the beauty.  I think it is because we've seen so much ugliness in the last two months, it was time to see beauty. 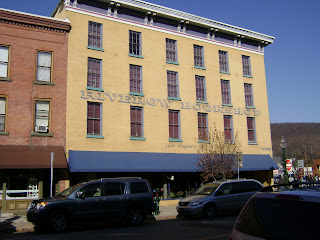 They lost their fabled basement filled with old books, but they are very much back in business.  They had two Bomba the Jungle Boy Books for $20. each - if I hadn't already spent money at the Hand of Man, I might have been tempted.  But no, I wouldn't have done it. 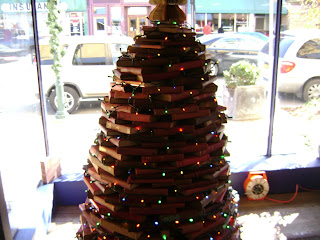 In the spirit of the season, this store presented a holiday tree made up of stacked old (I assume unsellable) books.  Reluctantly, I moved on to other sites.

Some of the historic homes of Owego. 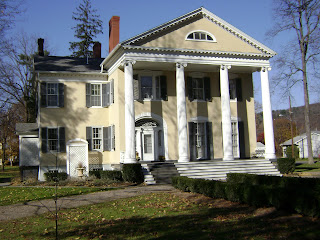 The Porter House (also known as the Harmon Pumpelly House). 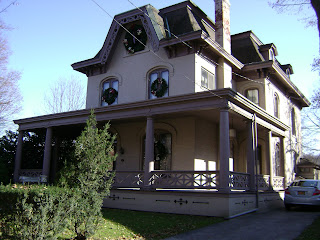 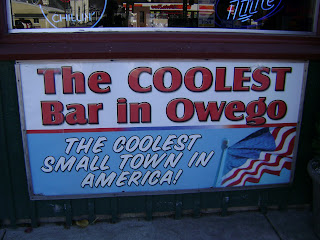 Yes, come h*ll or high water, Owego remains the Coolest Small Town in America.
In future posts I will share some more of my visit to Owego today.
Posted by bookworm at 5:38 PM

Email ThisBlogThis!Share to TwitterShare to FacebookShare to Pinterest
Labels: history, Owego, The Holidays