What do Brooklyn, Brunswick, ME, Cincinnati, OH, Gettysburg, PA and the Civil War have in common?

The answer is, the Roebling family, a family responsible for some of the most historic bridges in this country.  One of their members, a civil engineer by the name of Washington Roebling, served in the Civil War. 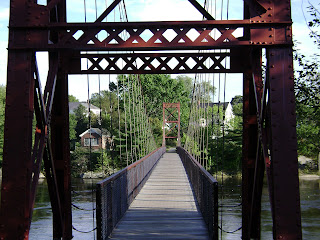 Chances are, you may well have traveled over at least one bridge designed by the firm of  John A. Roebling's Sons.  These bridges include the Brooklyn Bridge, the John A. Roebling Suspension Bridge (connecting Cincinnati, OH and Covington, KY) and the bridge above, the Brunswick Topsham Swinging Bridge over the Androscroggin River in Maine (photo above).

I have walked across both the Brooklyn Bridge and the Brunswick Topsham Swinging Bridge.  You couldn't ask for two totally different experiences.  The Brooklyn Bridge is traveled by thousands of people daily - by car, by foot, and by bicycle.  The scenery is breathtakingly urban, dominated by skyscrapers on both sides of the East River.  At the time the bridge was built, Brooklyn was a city separate from New York City.  (In some ways it still is-for example, still having its own library system.)

The bridge between Brunswick, ME (a college town I have blogged about before) and Topsham is a pedestrian only bridge.  Brunswick, ME has many connections to the Civil War, among them the fact that the book Uncle Tom's Cabin was written there and that General Joshua Chamberlain of Gettysburg fame also lived there for a time.

Washington Roebling served in various capacities as an engineer in the Civil War, including at the Battle of Gettysburg.  Stricken by the bends due to an accident during the building of the Brooklyn Bridge, he spent the last 40 plus years of his life as a physical invalid with a very active mind. Despite his disability, he outlived many people in his family and even ran the family business for a time when in his 80's.

If you've seen the Smithsonian rock and mineral collection at the Museum of Natural History in Washington, DC, you can thank Washington Roebling for the beginnings of that collection.

When you think of engineers and the bridges that link our lives....think of the Roeblings.
Posted by bookworm at 4:56 PM