Flowers in Brooklyn?  (one of the five boroughs of my native New York City). Why not?

Most people who have visited New York City  have only been to Manhattan and they have little idea what can be found in the other four boroughs.

Take it from me, a native of New York City - you are missing out if you don't venture out of Manhattan.

Fortunately, I still have family (and a childhood best friend) in Brooklyn (my Dad was a native of Brooklyn) and, back in February, I visited them.

Brooklyn is not a borough of skyscrapers (although there are some tall buildings downtown - and yes, there is a separate downtown in Brooklyn) but a lot of it is residential.  Many people live in apartment buildings but still more live in attached one family houses.

Brooklyn used to be a separate city and, as far as I'm concerned, it still is one.  Some parts (must be honest) are very ratty (in more ways than one) but there are some very nice places, too.

We walked around a neighborhood called Marine Park, in Brooklyn, and to my delight, I found these flowering cabbages.  They had survived the mild winter and were quite healthy. 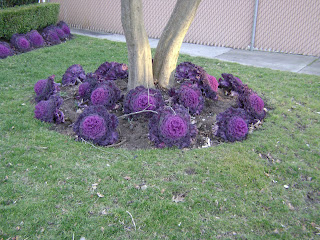 Trees grow in Brooklyn, too.  Yes, indeed.  I was told once that there are more trees in Brooklyn than there are in Kansas. 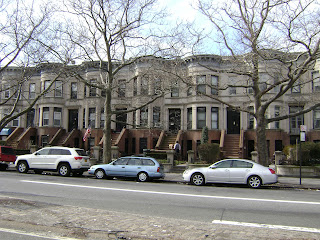 And one final picture of trees, taken along Ocean Parkway, a main parkway also in Brooklyn. 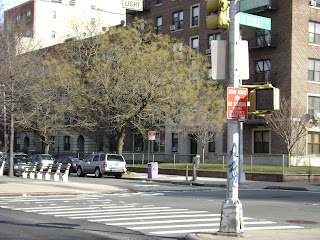 Remember:  not all of New York City is a concrete jungle.
Posted by bookworm at 4:50 PM