In Search of the Perfect Tuna Fish Sandwich

My uncle Henry (who will be celebrating his 89th birthday later this year!) drove me and my father to St. Louis for the day, from his then-home in Iowa.

I don't know at what point we ate, but my choice was a tuna fish sandwich.  Back when I was a child and a teen, I loved tuna and I'm surprised that I never turned into a fish.

Several years later I was back in the area and ordered a tuna sandwich at a diner and it had the same taste.  What was it? I couldn't quite place it.  My spouse, an excellent cook, went by my description and guessed it had sweet pickle relish in it.  I suspected it might also have Miracle Whip as an ingredient.

It's been years, over 30 years, since I was in the St. Louis area, but my spouse and I ended up staying last night in St. Clair, about 50 miles west of St. Louis.  This morning, I decided to drop in on a local cafe called the Lewis Cafe. Their menu was in our motel room (the Budget Lodgings, a gem - check it out if you ever travel the Mother Road), and it advertised that the owners raised their own beef.  And, it had been in business since the 1930's.

And, they made their own tuna fish salad.

They were closed yesterday (due to Labor Day) so dinner there was impossible.

But, they opened today at 5am. Our motel's desk clerk called them about 8:30 am (after sharing her recipe for tuna) to make sure they made sandwiches to go that early - they did.

So, what did we find?

Just the friendliest service you would ever want.  We were offered seats, and plenty of ice water while we waited.  The young lady who waited on us even suggested we use the restrooms.

Here are a couple of pictures of the interior of the Lewis Cafe. 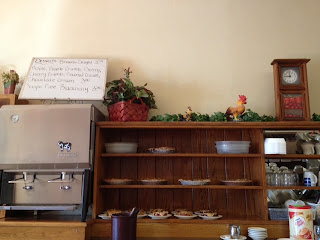 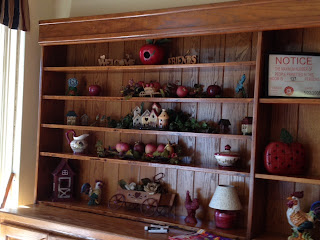 The young lady put together our "to go's" including a slice of pie, plenty of  napkins, forks, my husband's fried cube steak (fantastic, according to him) and this: 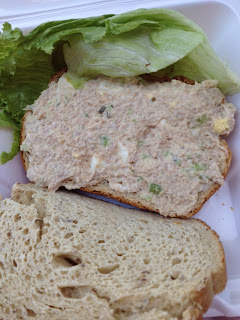 Heaven.  I've waited over 30 years for this sandwich. And it just wasn't the tuna.  This wasn't store bought rye bread, I'm convinced.

So how does the desk clerk at Budget Lodgings make her tuna?  Sweet relish (one point for spouse).  Miracle whip (one point for me). Chopped sweet onion.  Chopped hard boiled egg.

Spouse tasted my sandwich and I made him promise he would duplicate it as best he can.

And, I would be remiss if I didn't include a picture of our room at Budget Lodgings. (these are double beds, by the way). 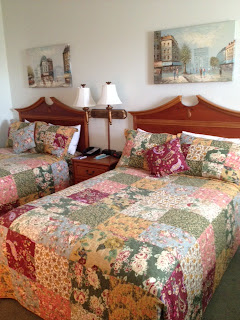 Is there a regional specialty food you found on vacation and wish you could have more often?
Posted by bookworm at 8:36 PM