The Secret of Success

Did you hear the crowd of screaming seniors in Syracuse yesterday?  Did you hear us in Rochester and in Buffalo, or even in Binghamton?

Peter Noone promised you would if we yelled and sang loud enough, and I have the sore throat to prove it.  So, please tell me that you did.

I don't often go to rock concerts to find the secrets of success.  But yesterday, I found it, in the person of a showman with talent.  His talent?  Loving his fans.  Making them feel loved.  Appreciating them.  Joking with them, and even mocking the fad of "selfies".  And, oh yes, there was his music. 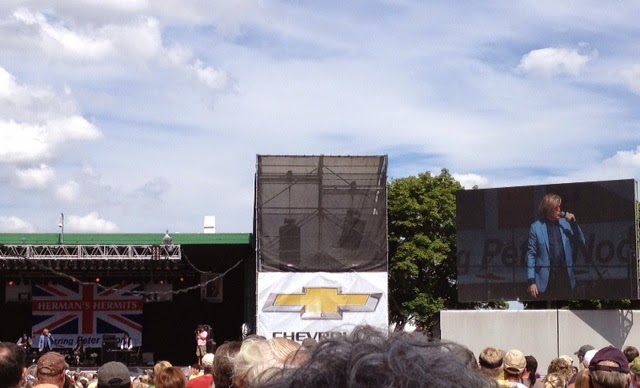 And was the love ever returned.  I was there, way in the back, under the shade of a tree as Herman's Hermits played yesterday at the New York State Fair.  It was standing room only, and we stood for 75 minutes in the 84 degree heat, not caring.  Fans carried in album covers and he autographed one of them.  He, to our surprise, offered to sign autographs after the show.

He had us yelling the words of "I'm Henery the Eighth, I Am", which is a cover of a 1910 British music hall song.

There was a king of hush all over the world, but not at the New York State Fair.

Mrs. Brown will forever have a lovely daughter.  But we've aged, and so has Peter Noone, who is now a very energetic 66 years old.  He danced on the stage to some of his songs, even doing a brief imitation of Mick Jagger.

A couple of songs had me in tears.  When I was a preteen, how was I to know about heartbreak?  But he sang about it, and tears were in our eyes as we understood that life goes on despite our personal tragedies.

To me, the real secret of Peter Noone's success is that he does what he has been doing since 1963.  He loves doing it, and it is so obvious.  I don't think it was an act.  I think he really wanted to be there in Syracuse, yesterday, interacting with his fans, and sharing the love.

We should all be that lucky.
Posted by bookworm at 5:27 PM

Email ThisBlogThis!Share to TwitterShare to FacebookShare to Pinterest
Labels: music