Today, when you visit Georgia, there is a sign welcoming travelers. 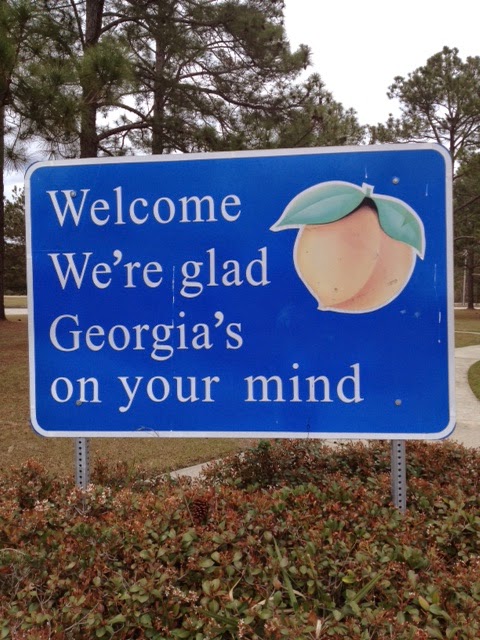 Georgia is glad it is on your mind.  At one time, they even gave away little bags of peanuts to arriving visitors at the visitor's center where you entered the state.

Feel free to drive down to Savannah, which welcomes modern tourists, both from the North and from the South.
Jefferson Davis, the former President of the Confederate States of America, once slept in the Comer House.  OK, it was in 1886, way after the war was over, but he slept here.


Savannah is full of beautiful architecture, beautiful squares, and the one of a kind Byrd's Famous Cookies.

I fell in love with Savannah, just passing through, in 1974.  I have visited twice since.  Savannah and Charleston, the other southern city I love, are two totally different places, and I treasure their differences.

I love the squares of  Savannah - there are 22 of them (plus two "missing" ones). They make you slow down and ponder history, as you can't walk (or drive, which you shouldn't be doing anyway) far without having to slow to go around one.  Many have statutes - at least one even has a person buried there.

With apologies to any lawyers reading my blog, Savannah, at one time, banned lawyers, as its founder detested them.

I love the trees of Savannah, dripping with Spanish moss.

But there was a time when Savannah did not welcome visitors from the North.

In November and December of 1864, Union troops, under the command of General William Tecumsah Sherman, marched their way through Georgia, starting at Atlanta, burning and destroying various targets and cities as they traveled.  By December 21, they reached Savannah, a major port and strategic target.
On December 21, 1864, 150 years ago today, Savannah surrendered to Sherman, who elected not to burn the city.

"I beg to present you as a Christmas gift the City of Savannah, with one hundred and fifty guns and plenty of ammunition, also about twenty-five thousand bales of cotton."
A man by the name of Charles Green, a wealthy cotton merchant, offered his house to Sherman to use as his headquarters.  The house, now known as the Green-Meldrim House, still stands today, near Madison Square.

While Sherman stayed in this fancy house, his troops camped out in the various squares.

In Madison Square, there is now a marker commemorating the end of Sherman's March to the Sea.
It really wasn't the end, though, as the March lives on in Southern memory to this day.

Although the people of Savannah didn't know it then, the Civil War would be over in a little more than three months.

Today, Savannah, a city of about 143,000 people, is the fifth largest city in Georgia and worth a visit to explore its history.
Posted by bookworm at 3:12 PM