For so many years, I have blogged about an abandoned defense plant in my neighborhood.  It has lain vacant since September 8, 2011, when floods ruined this historic building.  Officially known as Air Force Plant 59, it was one of the biggest, if not the biggest, wood framed building in the United States when it was built in 1942.

This is how I blogged about it when the abandonment of the plant first became official.

And how I treated it as a subject of my photographic rambles. 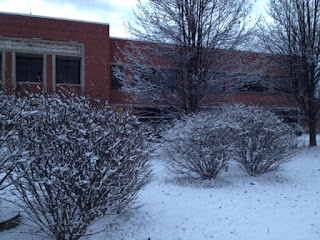 Several days ago, I took a picture.  It may be one of the last ones taken with snow on the ground.  Gaze upon it well. 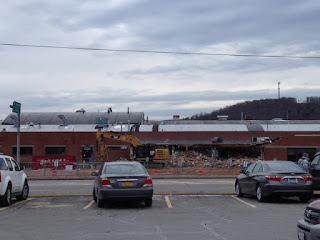 Because, Friday, the demolition of this 600,000 plus square foot building begun, after several months of preparation.

I am going to dread the demolition in some ways.

Many years ago, I lived in a neighborhood of Tampa, Florida called Hyde Park.  When I lived there, it wasn't one ofTampa's premier neighborhoods.  Over some 42 years, that has changed.

Shortly after I moved to Hyde Park, as a newlywed (it was what we could afford), buildings vacant for years were torn down to start construction of the Lee Roy Selmon Expressway, known locally as the "Crosstown".  Out of those vacant buildings, as demolition proceeded, came roaches.  And rats.

Lots and lots of roaches and rats.

I wonder what we in BAE's neighborhood are in for.


And, in a way, my heart breaks for this historic old building. It deserved better.

But all I can do, at this point, is watch.  And document the demolition.  And hope that the asbestos abatement was done well, because there is plenty of asbestos in that old building.

I can only hope that good comes out of this.  At least, it gave me a possible topic for "D" day at the Blogging from A to Z Challenge.
Posted by bookworm at 6:03 AM