It's Good Friday in the Christian world, and I was off of work.  I had the time today to make a homemade Pizza Rustica, the second of two Easter pies my spouse's family enjoys.

The first, Torta Pasqualina, or Grass Pie, was the subject of my Pi Day post on March 14.

Pizza Rustica is a savory meat and cheese pie. Like Torta Pasqualina, it has many variations.  Some put both sausage and ham into it.  Some will put hard boiled eggs into it.  Some people use a yeast dough for the shell, some a pie crust.  I'll be using a store made pie crust, since I am not noted for my pie crust making abilities.

But, as my regular readers know, I am not much of a cook.  So I enlisted my spouse, the family cook, in what turned out to be a lot more of a project than we had bargained for.

This is the recipe I used for the pie.  Sorry, metric readers, you are on your own today.
This is how it would have worked for anyone who knew what she was doing. 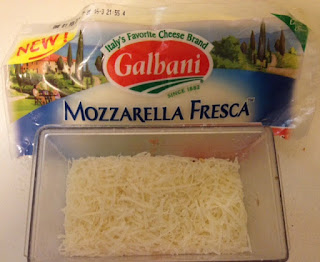 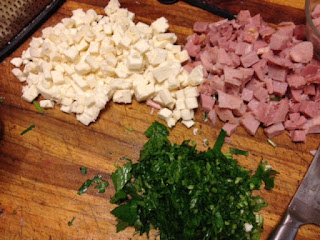 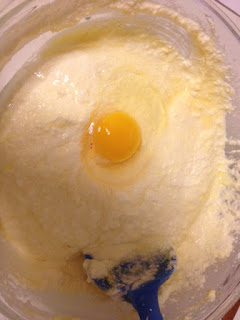 Add eggs one at a time.  Beat with a wooden spoon. 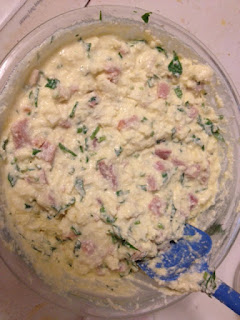 Add the other ingredients and stir well.  Now, pour your mixture into the pie pan and top with the second crust.

Bake the pie for 15 minutes in preheated oven, then lower the temperature to 325 and bake for about

Now, for what really happened.

I made the ricotta cheese mixture, after spouse chopped all the ingredients.

Then, I took the pie crust package out of the fridge and I unrolled the pie crust.  Or, I tried to.  It started to immediately crack and crumble.  I turned to my spouse. "It's all dry!" I cried. "We have to take it back to the store."

Having worked a long day (unlike me), spouse disagreed.  Instead, he read the directions.  "Take package out and let sit for 15 to 20 minutes. Then roll out crust...". So what we ended up doing was putting the box on the stove top, nice and warm from the preheated oven.

That did the trick...sort of.

He took out a springform pan and said "This will probably work".

So, after much fumbling and patching of holes, we (and it was "we") got the first pie crust in.  I poured in the mixture.  After more fumbling, got the top crust in.  Brushed it with egg mixture.  Put it in the oven, followed the directions.  The hour of baking ended.

It wasn't anywhere near ready. 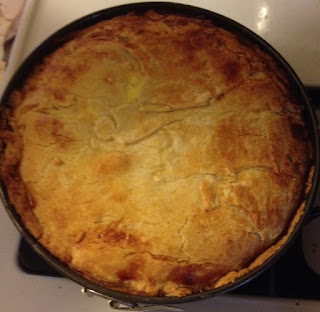 So we ended up cooking this a lot more, until the crust was a bit past golden brown.  Right now, it is cooling on the counter.

Some of this will go to my mother in law, and some of it will be tomorrow's supper with a salad.

Hopefully, I'll let you know tomorrow how it turned out.

Are you a good cook?
Posted by bookworm at 6:02 PM