Today is Independence Day in the United States. 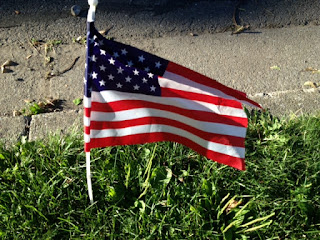 We say "three cheers for the red, white and blue" in our country.  So today, in honor of our "4th of July" I present the colors of the United States:

We tend to like quiet Fourth's, and will wish our country happy birthday tonight, when we watch fireworks on television.
But last night, we watched a minor league baseball game, and enjoyed fireworks after.

If you live in the United States, may you have a safe and happy Independence Day.  In honor of the holiday, I will treat you to my very first July 4 post - July 4, 2009.

An interesting, mostly peaceful 3rd and 4th of July.

Last night we went to the B-Mets (Binghamton Mets, AA Mets affiliate) game. The B-Mets are not playing well right now but the draws were the Golden Knights (U.S. Army) parachute team (who are also performing at the Binghamton airshow this week), a flyover and fireworks after the game. The stadium must have been half empty but those who were there had a treat as first one, and then five more, parachuters, aimed themselves at the stadium. At one point, two parachuters joined up, with one standing on the other's shoulders. What a wonderful view we had and I could kick myself for not bringing my camera.

The game itself was anticlimactic, with the B-Mets held scoreless through 8 innings. In the 9th inning they rallied and scored 3 runs-way too late. The fireworks were nice though, and will be serving as our fourth of July fireworks. A bit different than last year where we had our Fourth of July fireworks (not really, but they were on July 4th) in Saint John, New Brunswick...but that's a different story for a different posting.

This morning we decided to pick raspberries at a U-Pick farm. The route to the farm intersected with the traffic going to the air show. Luckily we had decided to go early because an hour later, it would have been impossible to get there. The berries were in good condition, considering all the rain we've gotten recently. We got our picking done before the air show started, and left as the Golden Knights did their opening parachute drop.

So we have a lot of raspberries now, which we need to process soon - they spoil very quickly. We'll make raspberry vinegar and probably raspberry liquor...and raspberry smoothies.

Here's a nice Raspberry Smoothie Recipe, courtesy of ingredients I had on hand.

3/4 c fresh raspberries
3/4 c SO Delicious Vanilla Coconut Milk
1/4 c non fat milk
(bananas would have gone good in this, except I can't eat them.)

May you all have a wonderful 4th.
Posted by bookworm at 8:00 AM

Email ThisBlogThis!Share to TwitterShare to FacebookShare to Pinterest
Labels: 4th of July