The woman pictured below was born five years before women got the right to vote, in 1917.  What better woman to write about, on this special day in the United States?

This post was originally written in 2014.  What I didn't know, at the time, is that someone had written a detailed article about the woman in this picture, who turns 105 this month.

She is also my spouse's aunt.

Many things have changed since my original post.  Later in 2014, after this post was written, this 102 year old woman fell, broke her hip, and underwent a partial hip replacement.  Although she survived the surgery, and she remains mentally sharp, her health never totally recovered.  She rarely leaves the house now.  I wish I could give you, my readers, a happier report but, as they say, "it is what it is".

Won't you comment below, and wish my spouse's aunt a Happy 105th Birthday?

Come, now, to happier days when I blogged about "Human Wormholes". 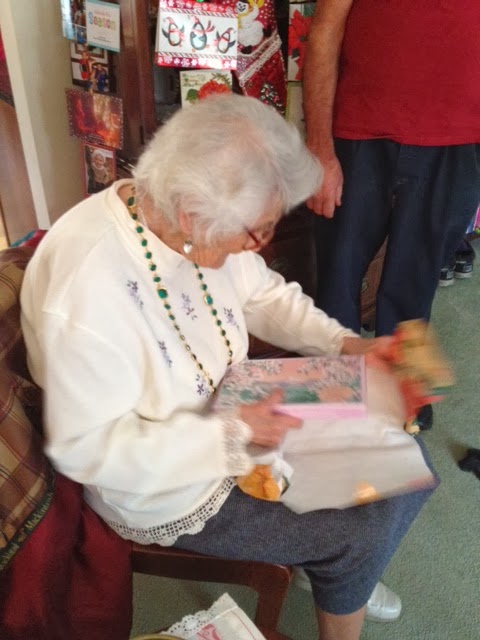 She is what some call a human wormhole.  And I hope she'll forgive me for saying so, because she knows I love her very much.  It's not the most elegant name, the "human wormhole" but if you think about it a little, the name is a bit catchy.

Yes, I know she looks like a woman of a certain age.  To be exact, she's 102 years old.  But she's so much more.  She's a treasured relative in my spouse's family.

She is a link to the past.  She may be physically frail, but her mind is as sharp as the day she was born. Maybe even sharper.

She's a living link to the past, the past that, for all but a handful of us, exists only in textbooks.  When I touch her, when I talk to her, I am touching history.

She was alive when the Titanic made its maiden voyage (1912).

She was alive when our country enacted a constitutional amendment permitting the income tax (1913).

She was alive during the post World War I flu epidemic (1918-1919) and vaguely remembers wagons traveling from house to house where needed to pick up the dead (what a childhood memory).

We are fascinated by human wormholes.  I've blogged about some of them myself, from the living grandson of a U.S. President who served from 1841 to 1845 to a man who witnessed Lincoln's 1865 assassination and lived to tell the story on a late night game show in 1956.

One story has an interesting twist.  It is said that Supreme Court Justice Oliver Wendell Holmes, who fought in the Civil War, shook hands with both former President John Quincy Adams (born in 1767) and a young/future President John J Kennedy (whose life was cut short by assassination in 1963).  I can not find any firm evidence for this having actually happened (there is a fascinating discussion online about whether it might have been possible, though). However, Holmes did have a link to more than just the Civil War, where it is said he once saved Lincoln's life.

Holmes, who lived from 1841 to 1937, had fond memories of his grandmother, who could remember red coated English troops marching through the streets of Boston at the beginning of our Revolutionary War. When she was five. In 1776.

If I live long enough, I might be a human wormhole, too.  I don't know if that makes me happy - or scares me a little.

Do you know anyone who would qualify as a human wormhole?

Day 21 of #blogboost The Ultimate Blog Challenge.
Posted by bookworm at 6:10 AM