I'm a bit "under the weather", so I am repeating a post.

In September 2014, I had an interesting experience on a "rail to trail" walking trail a handful of miles from where I live in upstate New York.

While researching another post, I came across this post from September 9, 2014.  I've had a couple of "close encounters" on the trail - including sighting a bobcat (possibly) three years ago.  But the following sighting may have been a little too close for comfort.

Enjoy this throwback post for day fourteen of the Ultimate Blog Challenge.

September 9, 2014 - a Supermoon is rising tonight, but it is cloudy so we will not see it. So instead, I'll give you a picture from two nights ago, as the moon rose over the Chenango River near downtown Binghamton, New York.  Not that it has anything to do with my post - I just wanted to start with this picture. 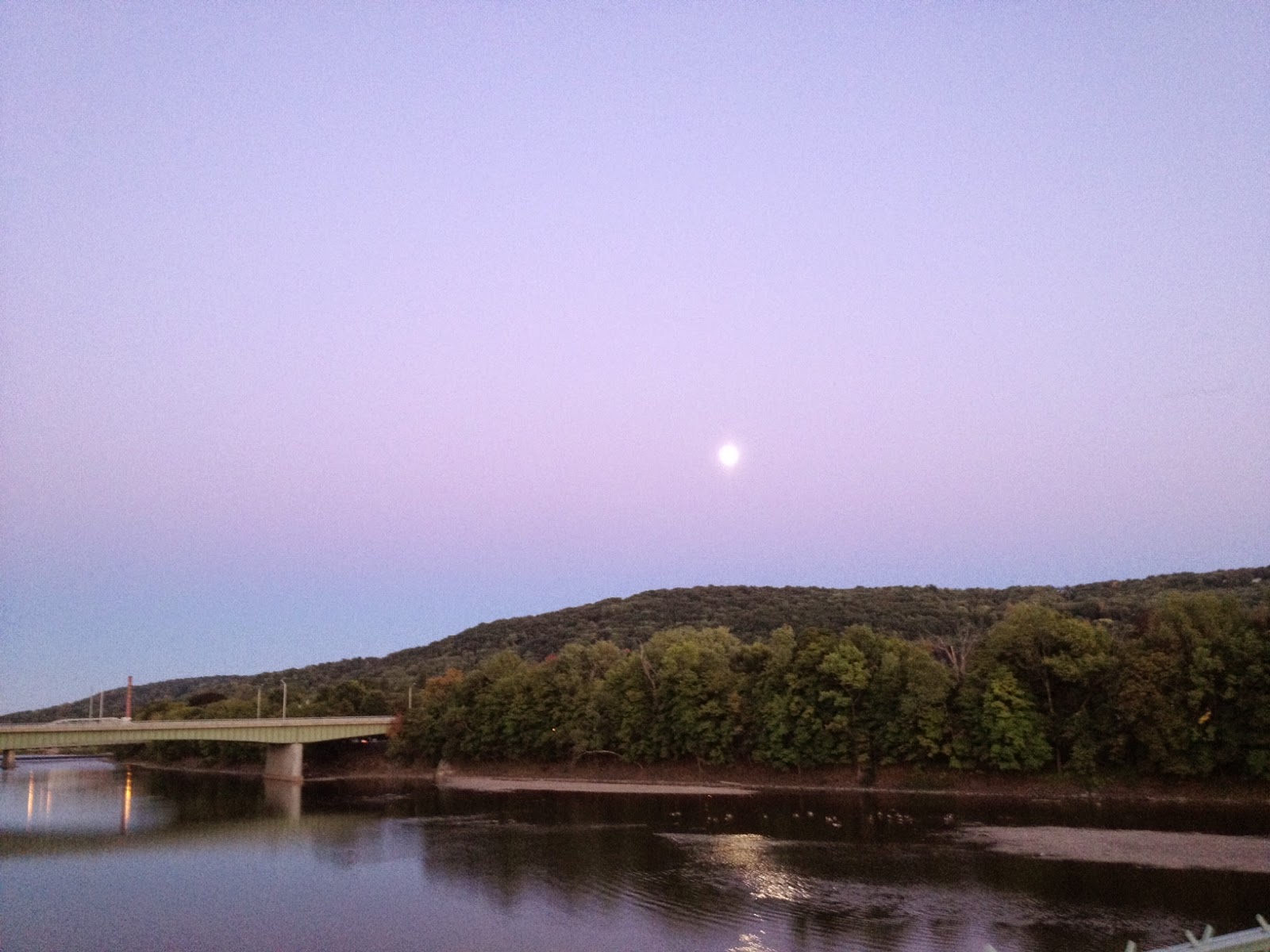 Nature is on my mind, and the impact it continues to have on our lives is something I think about often.

We were walking three or so Sundays ago on the Vestal Rail Trail, a walking trail we try to frequent at least once a week where we live in upstate New York.

We approached a bridge carrying elevated traffic that crosses over the trail. My spouse suddenly stopped, and seemed reluctant to continue.  He was acting so strangely, in fact, that I wondered if he was in some medical distress. It scared me for a minute.

"I'm not sure if I want to keep walking", he said. "I heard a strange sound - maybe it was a motorcycle, I don't know".  I hadn't heard the sound but my hearing isn't the best - so I told him "if you have an instinct not to go any further, let's not."

This was so different from how my spouse normally behaves, and I wondered what he had heard or seen as we walked back to our car, cutting our walk short by about a mile.

When we got to our car he said "I thought I heard a bear."

Where we live, in the "Triple Cities"of upstate New York, this is not a joke.  Vestal has been seeing a lot of black bear sightings, and one of the recent sightings (May, I think), in fact, was on the Vestal Rail Trail near to where my spouse was spooked by something.

And then, last weekend, we found this on the sidewalk of the trail near to where spouse heard the noise. Let's just call it what animals leave behind after the digestive process is complete. 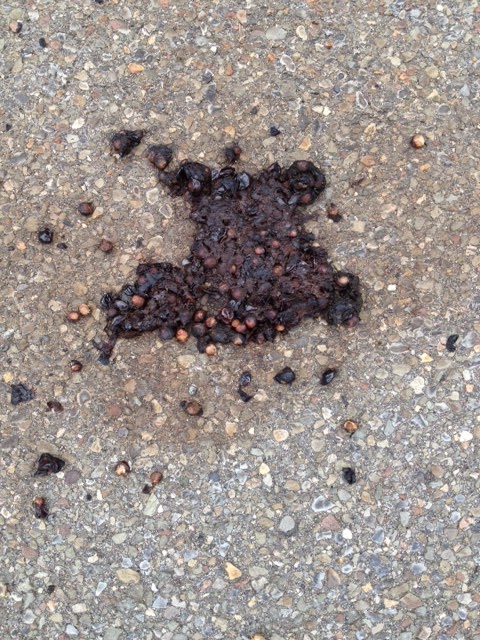 I hope it was a deer.  Anyone know for sure?

It's small consolation to know that bears may be more afraid of us than we of them.

Someone at work set up an automatic camera in her yard, and showed us some amazing footage of bears in her back yard.  And, my guest photographer (who lives out in the country) takes in her bird feeders at night.  One night she was a few minutes late and had her own close encounter with a bear.  The bear ran off.

But they don't always run.  Sometimes they attack.  A high school friend who lives in Florida had her neighborhood make the national news for bear attacks.


It isn't only bears.  A fox that may have been rabid attacked three members of an Endicott family earlier this summer (2014).  And, last year, we had our own close (or not so close) encounter, again on the Vestal Rail trail. We were alone, right after a rain, and are fairly certain a bobcat ran out and crossed the trail right in front of us.

You never heard about this kind of thing when we first moved to upstate New York in the 1980's.  But it is definitely becoming more and more common.  Increasingly, we know we are sharing our lives with wildlife.

It isn't just squirrels and sparrows (and the occasional skunk or raccoon anymore.

Do you have any wildlife sighting stories of your own to share for Day 14 of #blogboost the Ultimate Blog Challenge?

Tomorrow, I participate in a monthly meme - Garden Bloggers Bloom Day - and you are welcome to return for pictures of what is blooming in my house.
Posted by bookworm at 4:48 PM