I'm embarrassed (well, just a little). I promised you this recipe in my recent post for Lazy Applesauce.  Here's the background story:

Last month, my sister in law traveled from her home to say goodbye to her dying mother.  While she stayed with us, she helped me make an apple crisp.  There were peels and cores left over from her efforts, and I decided not (for once) to throw them away or compost them.

Recently, my spouse had gotten a book out of the library called "Cooking with Scraps:  Turn Your Peels, Cores, Rinds, and Stems into Delicious Meals".  The author is Lindsay-Jean Hard.  This is very much a modern cookbook, yet celebrates the old time virtues of "waste not, want not."

My sister in law is a firm believer in this concept, and decided, after helping with the crisp, that she wanted to do something with the peels and cores.  She had browsed the book and had an idea.

So here's the problem - I can't remember exactly what she did - because, true confession time, I had a stomach bug.  So all I can do is "sort of" tell you what she did.  (I could have asked her, yes, but that would have been too easy.) 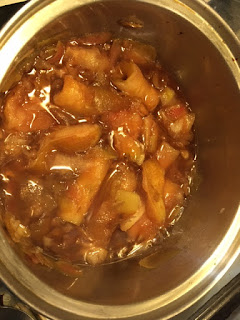 My sister in law took the peels and scraps of five large apples, and cooked them with some sugar. (Spouse thinks it was about a cup - it was less than what the recipe called for.) 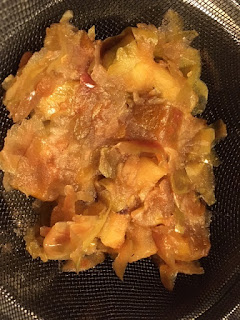 They were strained out.  The syrup was then cooked some more to reduce. 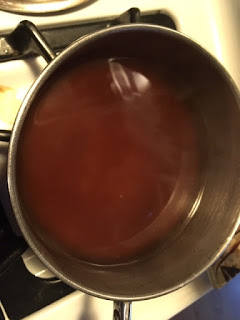 The finished (and delicious) syrup.  Cinnamon and/or cloves would be a nice additional touch.

I went ahead and found this recipe online - I hope it produces a similar result.

Incidentally, I browsed the "Cooking with Scraps" book and I highly recommend it to anyone who loves to cook and loves the concept of reducing food waste.
Posted by bookworm at 6:00 PM