Today is the last day of the Ultimate Blog Challenge and it is also Halloween.

The weather has been giving nothing but tricks to most of our country - Santa Ana winds and terrible fires in California, lots of snow in Colorado, unexpected early snow in many other places.  For us, we'll get rain and wind.  Fortunate, as things go.  The rain has already arrived.

But that doesn't mean we can't do a little Halloween decorating on my blog.  Many of these are courtesy of a scarecrow contest earlier this month at a local park. 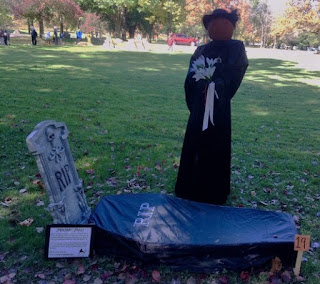 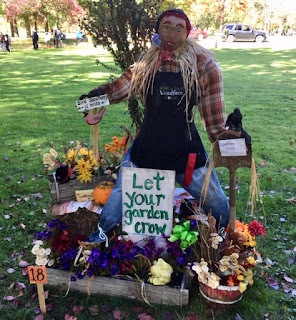 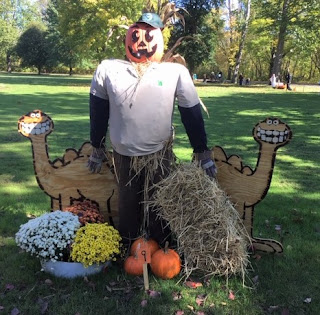 Time to feed the dinosaurs. (The late Johnny Hart, who wrote the B.C.and Wizard of Id comics, was local and, in fact, worked (before his days of fame) at one time in my neighborhood.) 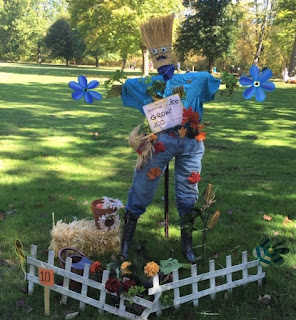 And one with a broomhead. 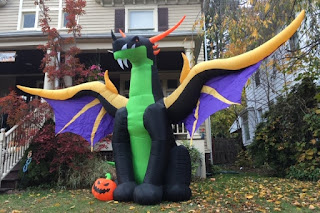 But most of all, don't forget to feed your dragon.

With that, I say goodbye to October and fall, as it seems winter always starts in November.  It is time for the gales and snows of November.

We'll end it with a song - from 1958, Purple People Eater.   Linking with Mary at Jingle Jangle Jungle for the last day of her Rockober Music Festival.

Day 31 of the Ultimate Blog Challenge #blogboost.
Posted by bookworm at 6:26 AM