The Reel to Reel Tapes

This is part of a post originally made on Christmas Day, 2013, with an update. We were together with my grown son, and my mother in law, for Christmas.

My son has been interested for years in obsolete technology, as I've blogged about before.

Years ago we had told him of how I purchased a Sony reel-to-reel recorder back around 1971, when I was in college. We left it behind in Arkansas moved to upstate New York in the mid 1980's. The tapes, though, recorded from about 1971 to 1974 and even later, had been in storage at my mother in law's house for years.

He wanted them, and he volunteered to go into the attic to get them. 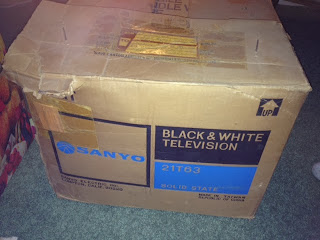 We had sent them from our apartment in Florida to his mother shortly before my spouse joined the Air Force in 1976.  All these years, we had the tapes back.

My son, who is in his mid 20's, got such a kick out of the box. Black and white television. Imagine! 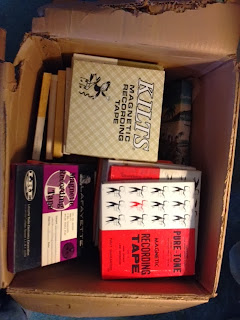 We opened the box, and this is what we saw.  After all these years, the tapes looked like they were still in good condition.  (If they are playable, though, it might be a minor miracle.) 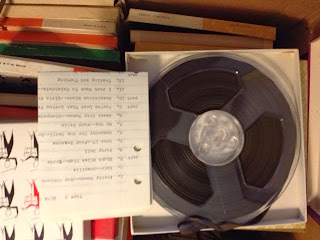 I had forgotten how meticulously I typed up lists of each song - name, artist and year.  He got a true Christmas Eve gift. It's fine with me if he keeps the tapes, and he did.

Now, after all these years, my son is looking for a tape player or another way to test one of the tapes.

Another activity for staying at home?
Posted by bookworm at 7:00 AM