Today, I show you the aftermath of a historic snowstorm yesterday in the Southern Tier of New York, and the highest snow total in our county's history (breaking a record on March 14, 2017 of 35.3 inches).

We made the national news.  Yes, I know there are places in our country quite capable of getting more in a storm than we did.  But somehow, it captured peoples' imagination.

We were fortunate.  The snowstorm was predicted (except we were supposed to get maybe a foot.)  We live on the edge of the New York snowbelt, so snow is not unknown to us (in a normal year, we get about 73 inches (185 cm) of snow.  Just not all at once.)

It was a light, fluffy snow.  We never lost power (we did lose internet a couple of times). And, best of all, it was not a work day for me.

Most of the snow came after 10pm Wednesday.  I woke up in the night to visit the bathroom, peeked out the window, and couldn't believe what I saw.  Not when I looked, but at one point it was coming down at a rate five inches an hour.  We got something like 15 inches of snow between 1 and 3:30 am Thursday. 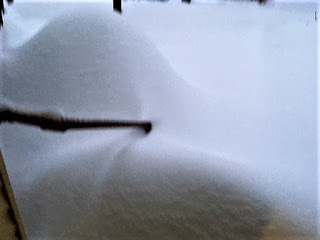 When I got up this morning, I opened the door.  Obviously, I wasn't going anywhere.  The thing on the left is the railing for our steps.  Our steps were buried.

My spouse tried to measure the snow from our front stoop but the yardstick disappeared into the snow.  We estimated about 39 inches.  Officially, we got just over 40.  There wasn't any snow on the ground when this storm began. 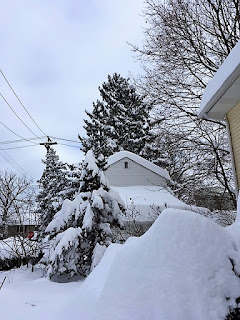 Mid afternoon, spouse had cleared enough of a path that I could walk across part of the front of our house, and I could take pictures. 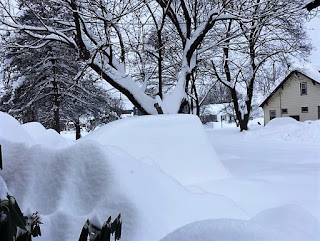 This is part of what he had to clear up.  Under the big snow lump is our SUV.  There is so much white here. Even the sky looks white. 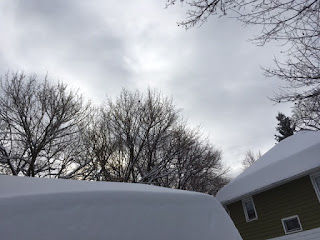 Part of our garage roof.  I was really trying to get the sky. I should have gotten the roof, too. 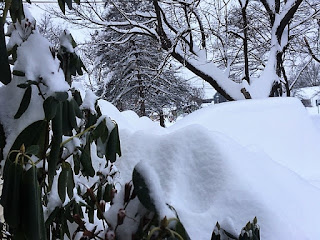 Another view. Our SUV is under there somewhere. 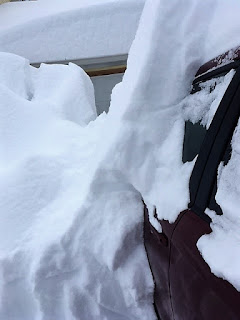 As of me posting this morning, the plow still hasn't come through on our road.  I guess we'll be settling in for a snow quarantine and chipping away at the snow - not that we have any place to put it.