One interesting thing about the winter and living in an area with many trees that drop their leaves for the winter is the changing behavior of birds as the winter progresses.

As a beginning birder during this pandemic, I have witnessed behavior I never paid attention to before.  Today's post considers a common bird in the Northeast United States where I live:  the American crow.

These large black birds may be common throughout most of the United States, but that doesn't make them less interesting.  Their attraction to trees in the winter fascinated me.  I have seen them flocking at sunset, and heard them disbanding near sunrise.

Why do crows flock to trees around sunset?  This newspaper article explains.

Basically, it's a matter of protection, as crows are nearly helpless at night.  The crows gather in large numbers, sometimes in the hundreds, and jockey for nighttime position.  The unfortunate ones who are in the outer parts of the cluster are more vulnerable to night hunting birds such as owls. 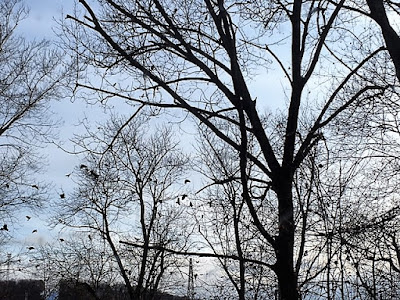 One such roost took place in my back yard less than a week ago.  See all those dots?  Those are the crows flying. 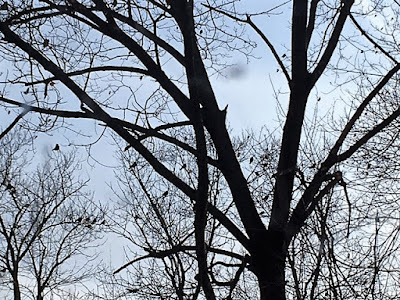 You can see a couple of the clusters forming in the lower half of this photo.  I took these pictures from the inside of my house with my old iPhone SE first edition - I didn't want to disturb them.  Unfortunately it doesn't have much of a zoom.

I love the trees for the shelter they give birds - plus food, and places to build their nests. 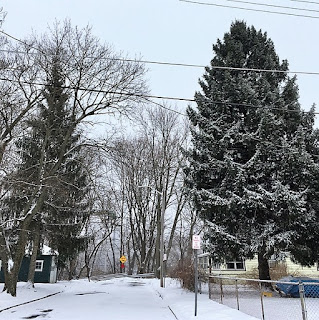 Snowy bonus:  for the many who join with Parul's #ThursdayTreeLove who rarely get to see snow - I decided to include an after snow picture from Tuesday's storm (which happily dumped much less snow on us than the original prediction a week ago) showing both evergreen and deciduous trees in perfect harmony.  Call them the guardians of this dead end street.

Before I leave, I want to commemorate the 35th anniversary of the explosion of the space shuttle Challenger on January 28, 1986.  May the brave astronauts who perished that day forever Rest in Peace.  Here is a post I wrote several years ago on the topic.