I was not able to make the 150th anniversary of the start of the Civil War, at Ft. Sumter, in Charleston Harbor.  But, I did visit Charleston in March and I must say that Charleston must have more history per square inch than almost any other city in the United States.

As a "Yankee", it is also fascinating to me to see "the other side".

If I had made it, there would have been so much to see and experience.

But in another way, it was good that we were able to experience a lot of downtown Charleston instead of chasing around various Civil War venues. 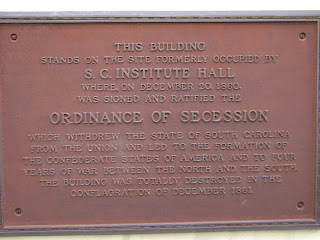 Over the next four months, a crisis built at a fort in Charleston Harbor, Ft. Sumter.  Actually, not too much of Ft. Sumter from the Civil War exists; much of what is on the site now dates from the Spanish-American War.  Nevertheless, there is a lot to see.


This first picture is the boarding of the ferry that takes you to Ft. Sumter.  The ferry ride lasts about 1/2 hour each way and you have an hour or so to tour the fort.  Boarding, we had a good view of the lovely Ravenel Bridge that spans the Cooper River.  Charleston lies between two rivers, the Ashley and the Cooper. 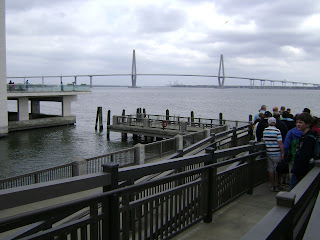 A taped narrative plays as the ferry approaches the island Ft. Sumter is located on. 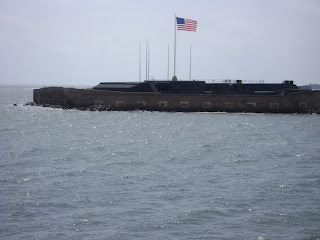 When you embark at the Fort, what you see remaining of the Civil War fought looks like this.  It is amazing, given the bombardment this fort suffered, that any of it is still standing. 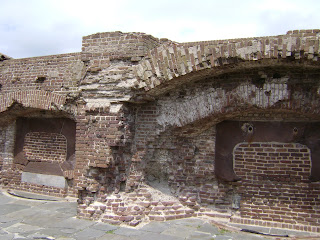 Inside one of the Spanish-American War buildings, is a museum where the Ft. Sumter Flag is on display....battered but in a place of honor.  There are 33 stars (states) on this flag. (It wasn't until later that I was told that flash photography can damage old cloth...but there was no sign prohibiting flash photography that I saw.  After the fort was surrendered to the Confederacy the union Major kept the flag.  This flag traveled throughout the North and was "auctioned off" to raise funds for the war. 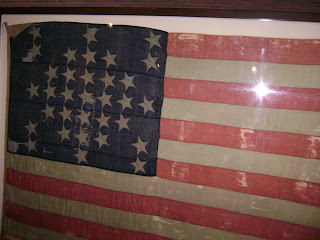 On the way back, you can see the aircraft carrier USS Yorktown, that is on display in Patriots Point in Charleston Harbor. In a way it's good that we visited before the crush of people coming to commemorate the anniversary.
We enjoyed our visit very much but wish we had had more time to explore.
Posted by bookworm at 4:11 AM