By now, I bet that most everyone in the United States has heard about the terrible snowstorms in the Buffalo, New York area over the past several days.  Some areas received over 51 inches of snow in less than 24 hours.  Others have had so much snow, that their houses are covered in snow.  Many motorists have been stranded.  At least eight people (as of this writing) have died. (I also hasten to assure my readers that New York is a large place, and, as I write this the snow on the ground where I live is....a dusting.


Heavy snowfalls are far from unknown in New York State - in fact, we have an annual competition called the Golden Snowball.  The city where I work (Binghamton) has even won it a couple of times.  But if Buffalo moved its official weather station to Hamburg, for example, they could win it this year without having another flake of snow fall. (I suspect a lot of residents of the area around Lake Erie wish that no more snow would fall this winter.  Anyone for a bunch of surplus snow? You must haul yourself)

Something especially fascinating is what you might call the snow door effect.

There is something awe inspiring about the thought of opening your front door and finding - a wall of snow.  And, in our modern day and age, you can take a picture and have it all over the Internet in seconds.  People take pictures of themselves in front of their snow dog, their toddlers, their dogs.

But there is a different kind of snow door, as I found out about yesterday when some one commented on a blog post I published back in June of 2011.

This house on the edge of property owned (or at least operated) by the Cornell Cooperative Service in Binghamton has a door that is many feet above the ground.  I knew there must be a reason and asked , in June of 2011- did anyone know?  Maybe this once had a second floor outside stairs and porch?  Or maybe Superman rented out the space? 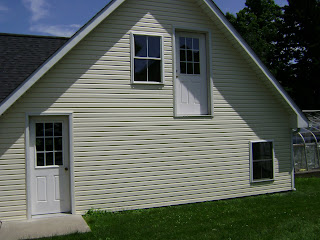 And then there was the low window on the first floor, on the right.  Somehow, this seemed so....unbalanced.

Well, I found out yesterday what this second floor door is.

It is a snow door, put there for cases when the snow got so high, you need to get out through the second story of your house.

So clever and yet - I never guessed.


A door to nowhere - unless you live in snow country, in which case you may be more than happy to have this door in your house.

Does your area have a special invention that helps live life where you are?
Posted by bookworm at 6:18 AM