History is not a selection of boring dates and facts.  History is the story of us, the human race.

History is full of people whose stories are as fascinating as anything you will ever find in fiction.

The American Civil War period (1861-1865 and the years before and after) are full of fascinating stories of people who, in another age, may have gone unnoticed.  But here they were, in unusual or hard times, and they changed the course of the human race.

Last Sunday, I blogged about a great man, born a slave, who became an orator, an abolitionist, a supporter of women's right to vote, an educator, and a newspaperman (among other things).  Frederick Douglass had many links with my native New York State.  So many stories of history are just around the corner, or mere miles away, from where you live.

Today, while thinking about upstate New York, I think about a woman, also born into slavery, who accomplished so much:  Harriet Tubman.  So I had this post partially written when realized that I had blogged about Tubman before, in September of 2014.  So, readers, you have two Tubman stories for the price (so to speak) of one.

Ms. Tubman was born a slave in Maryland, as Douglass had been.  Her original name was Araminta Harriet Ross.  Like Douglass, she did not know exactly when she was born - it is estimated she was born between 1820 and 1825.

Unlike Douglass, Tubman's early life was full of physical abuse, including a head injury inflicted as a punishment as a teen causing her seizures, narcolepsy and other permanent injuries.

After her owner died, Tubman feared for her future - she was sickly, and her economic value as a slave was limited by the injuries she suffered as she was growing up.  Think of her, fearing for her future.  "Just" a slave woman, what could she do about it?

A lot.  Tubman was fortunate enough to live in Maryland, a slave state that bordered Pennsylvania, a free state.  If she made it to Pennsylvania, she would be free.  Tubman successfully escaped slavery in 1849.  Like Douglass, she was able to flee to Pennsylvania.

How did she do it?  She was guided by dedicated opponents of slavery, the Quakers, who, with others, had set up a network called the Underground Railroad.  Walking at night, Tubman would be guided by the North Star, ever further north.  The guides were called "conductors".  She would sleep in hidden basement hiding places at night.   She walked from Maryland into Delaware (another slave state) and finally, into Pennsylvania.  This journey several hours long by car today, took Tubman some seven weeks.

If you were a slave finally free, would you ever go back to slave territory?

Tubman received word that family members were about to be sold.  She went back and guided them to safety.   Again and again, a total of 11 times, Tubman went back into slave territory to guide slaves to freedom, literally risking her life.  She was called "Moses" by some admirers and "The General" by others.  She rescued her brothers, a cousin, and others.

Tubman was never caught.  Everyone she "conducted" made it to freedom safely.

During the Civil War, Tubman both acted as a scout and spy, and also guided the Combahee River Raid, which liberated more than 700 slaves in South Carolina.  It is possible that Tubman was the only woman who led a military action during the war.  Tubman was never able to get an official government pension for her service during the war, one of many injustices she suffered during her life.  Congress ended up passing a bill, just for her, to receive a pension, starting around 1897.

Tubman's association with upstate New York started before the war began.  Then-Senator William Seward (the same Seward responsible for the purchase of Alaska from the Russians) sold Tubman a plot of land near Auburn, in the Finger Lakes. 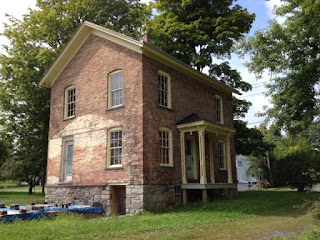 After the war, she lived in this house with her second husband, and an adopted daughter.  Eventually, Tubman started to care for the elderly and infirm in her house, herself suffering from her health problems.

In 1903, Tubman donated a parcel of her land to the African Methodist Episcopal Church in Auburn, which still owns the property today. The Harriet Tubman Home for the Aged opened in 1908, and Tubman ended up living in that facility.
Tubman died there in 1913 and is buried in Auburn.

Over the years, Tubman has been more and more admired.  In the next few years, she will be the first woman to be featured on American paper money, the $20. bill, replacing President Andrew Jackson.  And her property will become a National Historic Park.

The recognition is way overdue.
Posted by bookworm at 10:48 AM