The Flower of the South

This is the most beautiful spring ever in the 24 years I have lived here.

The crabapples are in all their glory now, and I hope the local paper publishes the letter I wrote to the editor about us having a flowering tree festival of some kind here in the Triple Cities.

But, much as I know how hot summers can get down South, I miss the camillas that we saw in Georgia.  To be exact, in Massee Lane.

I didn't recognize them at first, when we arrived in Georgia in mid-March.  I was wondering what roses were doing blooming so early.  But, the leaves didn't look at all like roses.  And the plants weren't rose plants.

Somewhere in my vaguest of memories whispered, from long ago, the word....Camilla.

And, a local woman in Americus, GA confirmed that was what they were and told me about the place to see them.  A place called Massee Lane, in Ft. Valley, GA.  It isn't that far from Macon, and that was where we were heading next.

What an amazing place.

If not for that local, I wouldn't have found Massee Lane.  It is so amazing, it will take more than one post to describe it.

Everyone is familiar with camillas.  Don't think so?  Well the tea many of you drink is the leaves of a camilla.

These aren't tea plants-which aren't truly hardy near Macon, although Massee Lane had several tea (as in drinking) plants.  Rather, what they grow are flowering camillas.  Look at these pictures and tell me if they aren't as pretty as any rose you have ever seen.  And the best part?  In Georgia, they bloom in the winter.  In fact, when we were there in March, they were close to finishing up.

The hand in one of the pictures gives you an idea of how large these flowers are. 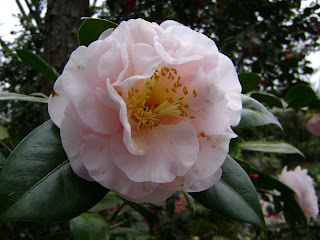 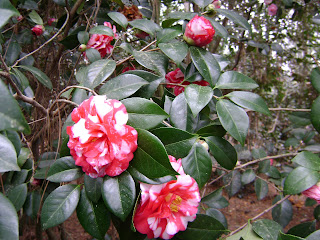 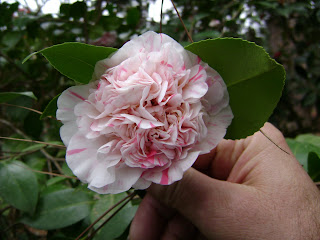 Doesn't that make me want to start trying to grow these plants in the Binghamton, NY area (zone 5)? Wouldn't that be suicidal? (to the plants, that is.)

This link is to an article written by a man living in Long Island, NY.  Officially, Long Island is Zone 7 (and we are 5) but there is such a thing called microclimes.  So, this man grows camillas in New York State.

So why shouldn't I try something impossible?

I wonder if, one day, I should try this, maybe using the varieties that worked for him best.   Why not?  Since I am busy buying and knocking off orchids, why not try to grow camillas?

Why should it just be the flower of the south?

In the meantime, I'll stick to killing orchids.
Posted by bookworm at 7:23 PM